GEARING UP FOR MASTERPIECE FAIR 2013

Every June London starts to buzz – the summer season begins, London fills with tourists, and a host of special cultural and sporting events get underway. There is racing at Ascot, tennis (with the traditional strawberries and cream) at Wimbledon, and a host of amazing art fairs and exhibitions.
The jewel in the crown of arts fair season is undoubtedly the Masterpiece Fair, which takes place in the magnificent grounds of the Royal Hospital Chelsea, June 27-July 3, 2013. Barely a month preciously the hospital grounds have hosted the venerable Chelsea Flower Show, but as soon as the marquees and gardens for this event are dismantled a new edifice begins to rise at Chelsea. 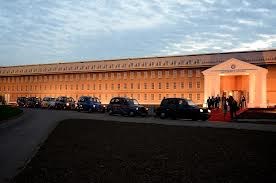 Once it was the Grosvenor House Antiques Fair that London’s art community talked about, but after 75 years it held its last fair in June 2009, and in 2010 Masterpiece London was born, and in just four years it has become the most anticipated fine art and antiques fair in the UK, with a truly international following. This year over 150 of the world’s finest art and antiques dealers will descend upon Chelsea, offering up an Aladdin’s cave of museum-quality treasures, including the finest jewels, luxury cars, old master paintings, antiquities, and modern art & design. 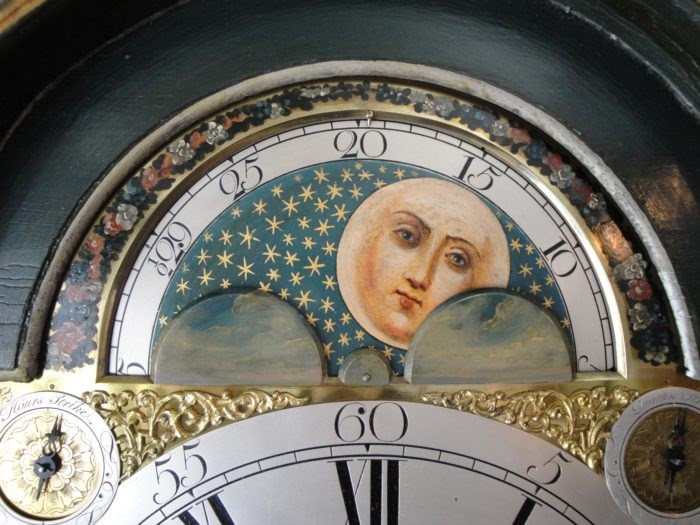 Detail of a clockface with moon phase. Raffety Antique Clocks

And of course there will be the finest clocks for sale too! Raffety Clocks of Kensington Church Street will be exhibiting at Masterpiece once again. Nigel Raffety has managed to assemble a sumptuous stand of horological masterpieces dating mainly from the seventeenth and eighteenth centuries. After many weeks of research, and then an agonising few days of packing and preparation, our Masterpiece stand, B16, is almost ready to welcome you. 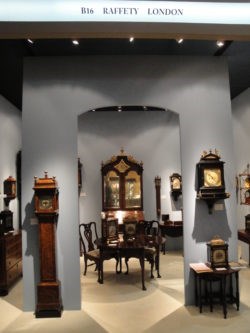 We want our Masterpiece offerings to be a bit of a surprise, so we won’t give it all away in this short article. However, we will have examples by some of the best known clockmakers, including Daniel Quare and James Markwick. We have also focused on rare and unusual examples of the clockmaker’s art. For example, we will show an extremely rare miniature longcase clock with a stunning walnut veneer. This was the work of the London maker Christopher Gould, probably produced for the Italian market. It once graced the rooms of a Medici palazzo in Florence. 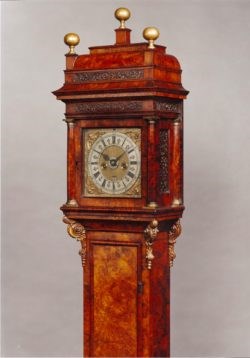 Another amazing survival is a later-seventeenth century ebony and gilt repousee basket top bracket clock by Benjamin Merriman, featuring a central roundel of St George and the Dragon. Merriman worked in the parish of St Martin’s, Ludgate, and the gilt roundel at the centre of this magnificent basket top screws into the top separately. 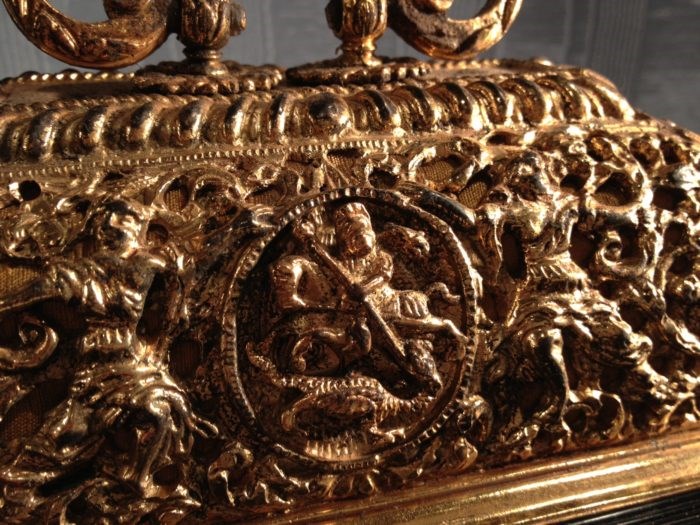 Detail of gilded basket top of a bracket clock by Merriman, with St George and the Dragon centre. Raffety Antique Clocks

There will also be a rare and large Charles II period ebony table clock surmounted by gilded figures of Saints Basilisa and Anastasia. While the clock is of English manufacture it was possibly made for a rich, European client and the two saints depicted are memorable martyrs of the early Roman church who are said to have buried the remains of Saints Peter and Paul. 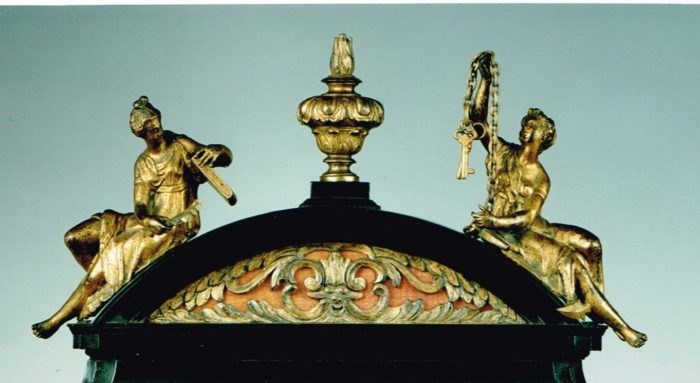 We will of course also have fine antique furniture on display, including an unusual George II period bureau bookcase with a clock above the glass doors. What will unite all the items on view is a sense of history and incredible craftsmanship. From the fine clock movements with their engraved backplates to the stunning veneers and gilded mounts, there will be something to temp, intrigue and fascinate everyone who loves the best antique clocks and furniture. 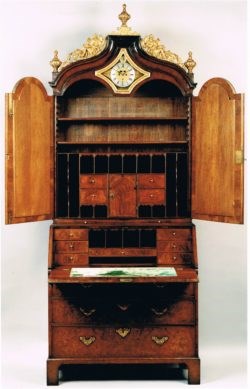 Come and see us on stand B16 at Masterpiece London 2013 and you can listen to the clocks rhythmic tick tock. Stay a while and hear the symphony of chimes on the hour. Almost 300 years after many of these clocks were made, they still keep time and stand as a testament to the skills of some of England’s greatest craftsmen. Each clock has a story to tell, about the men who made them or about the era in which they were produced. Uncover stories of our maritime history or eighteenth century England’s fascination with Chinoiserie and Chinese lacquer. Or simply enjoy the exquisite and timeless beauty of the clocks. 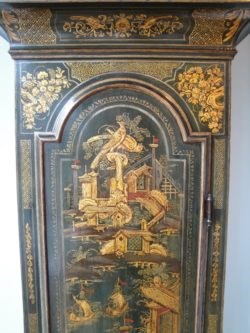 Raffety Clocks will be exhibiting on Stand B16. Masterpiece Fair runs from June 27 to July 3rd. If you would like tickets contact our office on 020 7937 2220.

For further details on the fair and how to get there visit www.masterpiecefair.com