We stock antique marine chronometers dating from the 19th to early 20th centuries. The quality brass movements are usually set on a gimble within a mahogany case to protect them from the effects of being at sea. Chronometers epitomise much that is appealing about clocks, combining as they do, historical significance, mechanical complexity, inventive ingenuity and real aesthetic charm.

Until the mid-18th century marine navigation was still a relatively inexact science, in large part due to the difficulty of calculating longitudinal positioning. Navigators were, of course, able to ascertain their latitudinal position through observation of the angle of the sun at noon. However, to determine longitude, a precise, portable timekeeper was needed which would be un-effected by turbulence at sea. The chronometer was a solution to this problem. It provided a time of a fixed location, Greenwich, for example, this would serve as a reference point for determining a ships longitudinal location. The first marine chronometer, built by English clockmaker John Harrison in the 1730s allowed Britain to crack the problem of longitude, leading to Britain’s dominance at sea as well as a great leap forward in precision clock making and time keeping. 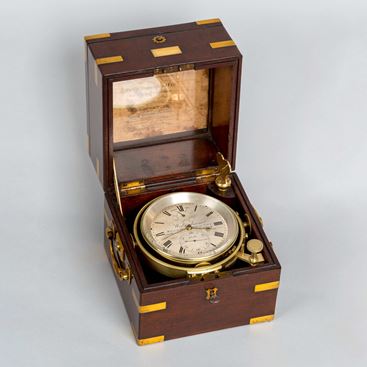