With the recent birth of HRH Prince George of Cambridge, a new chapter has opened for the royal family at Kensington Palace. Having discussed the history of the palace in previous blogs, we thought it might be interesting to look into the life of a local clockmaker who supplied fine clocks to Kensington’s royal residents in the nineteenth century.

James Gorham (active 1815-1850s) spent most of his life and career working in Kensington High Street. His shop, at no. 5 the High Street, was almost directly opposite the gates of Kensington Palace, so he was well placed to tempt Kensington’s royal residents. 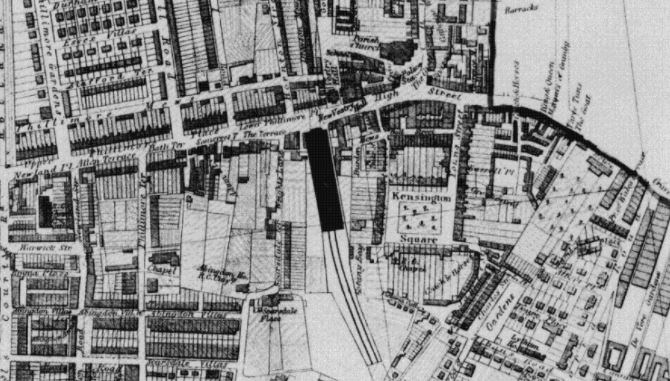 Historic Map of Kensington, by Edmund Daw, 1879 showing the site of Gorhams shop on the far right top.

Gorham became known for producing high quality and stylish clocks of all sizes, and he would eventually sign most of his dials either “clockmaker to the royal family” or “clockmaker to the Queen” following the accession of Queen Victoria. His first royal client may have been HRH Prince Augustus Frederick, the Duke of Sussex, 6th son of George III. The Duke of Sussex was a great clock collector, amassing one of the finest collections of clocks during the nineteenth century. When his rare Tompion bracket clock needed repair and cleaning in 1834, he took it to James Gorham’s shop. 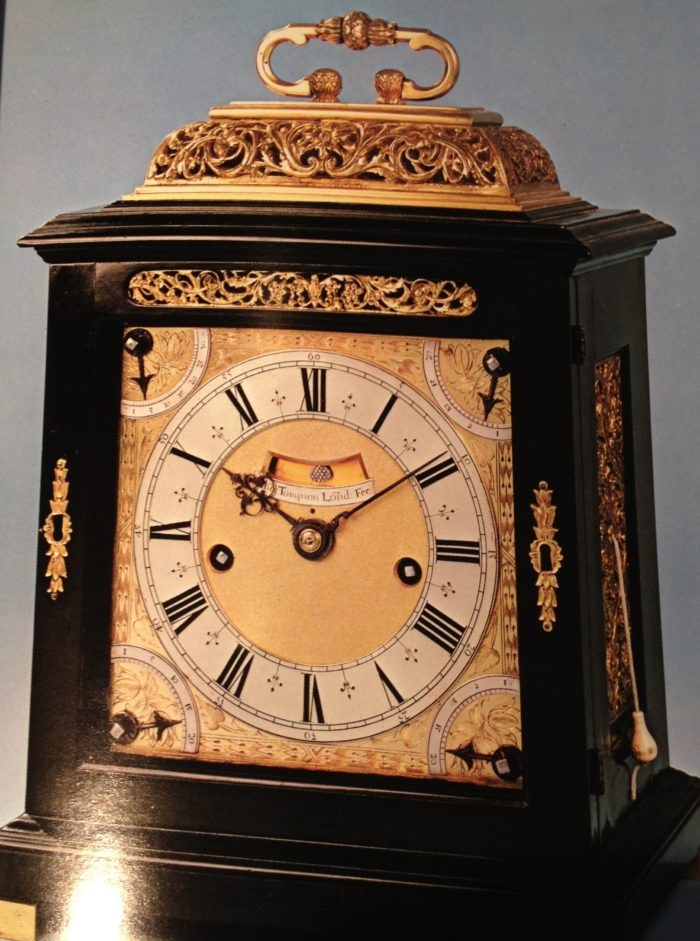 The Duke lived at Kensington Palace, and it was probably through the Duke that his young niece, Princess Victoria of Kent (later Queen Victoria), became acquainted with James Gorham’s work. Gorham also supplied a clock to George IV, which was sent to Windsor Castle in 1824 (see royal collection no. 30149). Less than two months after her accession to the throne Victoria granted Gorham an official royal warrant, which is dated 7 August 1837. 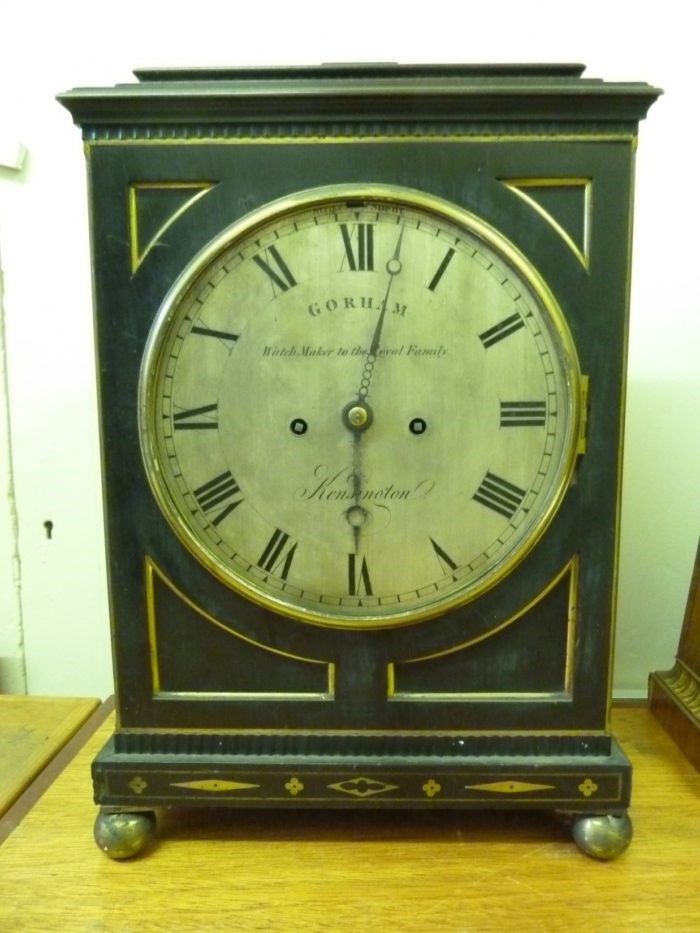 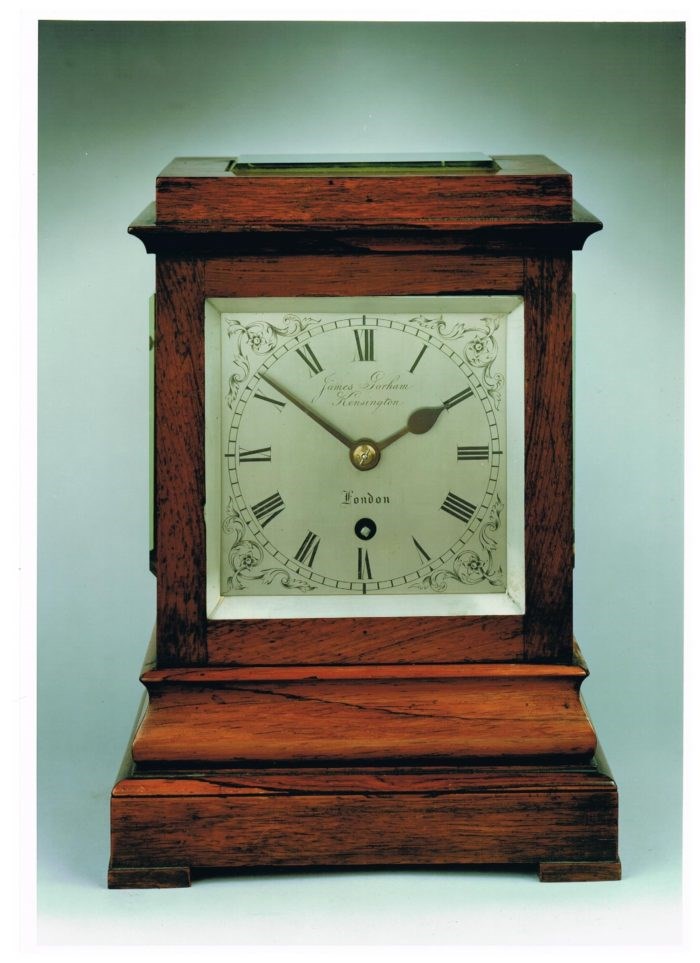 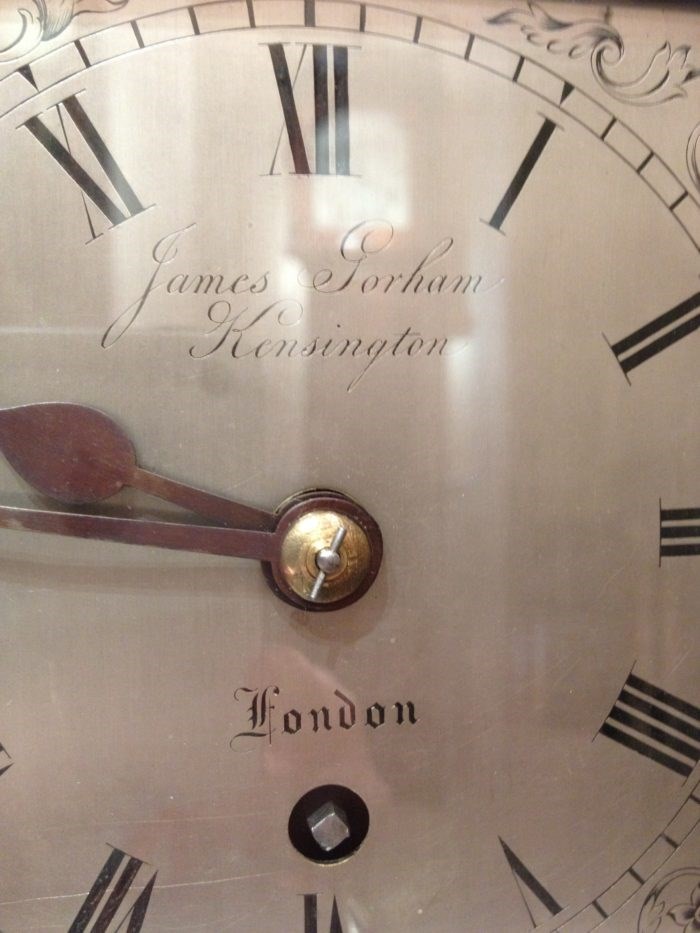 The second Gorham clock is an exquisite Regency period 3-train quarter striking longcase. The elegant mahogany case has the finest flame veneers and chamfered corners which flank the full-length, arched trunk door. The chamfered corners are repeated in the arched hood which has a dentil cornice.  The 12.5 inch round silvered dial has Roman numerals and an outer minute band. The signature on the dial – “James Gorham, Kensington, Clock and Watchmaker to the Royal Family” – is engraved in an elegant flowing italic style. The silvered dial, without minute numbering, is typical of the period. The round dial glass is held in a hinged brass bezel, similar to those on bracket clocks of the period, and is framed by decorative ebony spandrel corners. To the sides of the hood there are brass grill sound frets. The blued steel hands are well shaped and are most likely original. 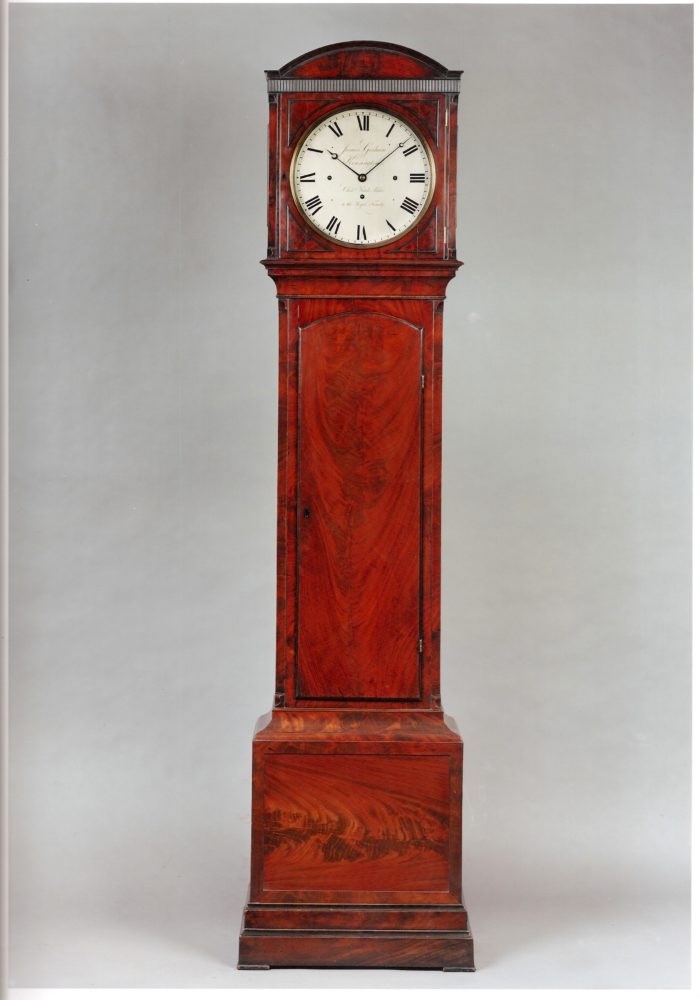 The substantial 3 train movement strikes all four quarters on 8 bells and the hours on a single bell. The clock retains its original pendulum with a calibrated rating nut below the substantial bob. The brass cased weights are original and retain good colour and patination. This style of clock became fashionable in London around 1820 and they are sometimes known as gentlemen’s library clocks. As Loomes notes in his book Grandfather Clocks and Their Cases  (London, 1985) this style of clock was “almost entirely confined to London and its environs, and ran from perhaps 1810 to 1840.” 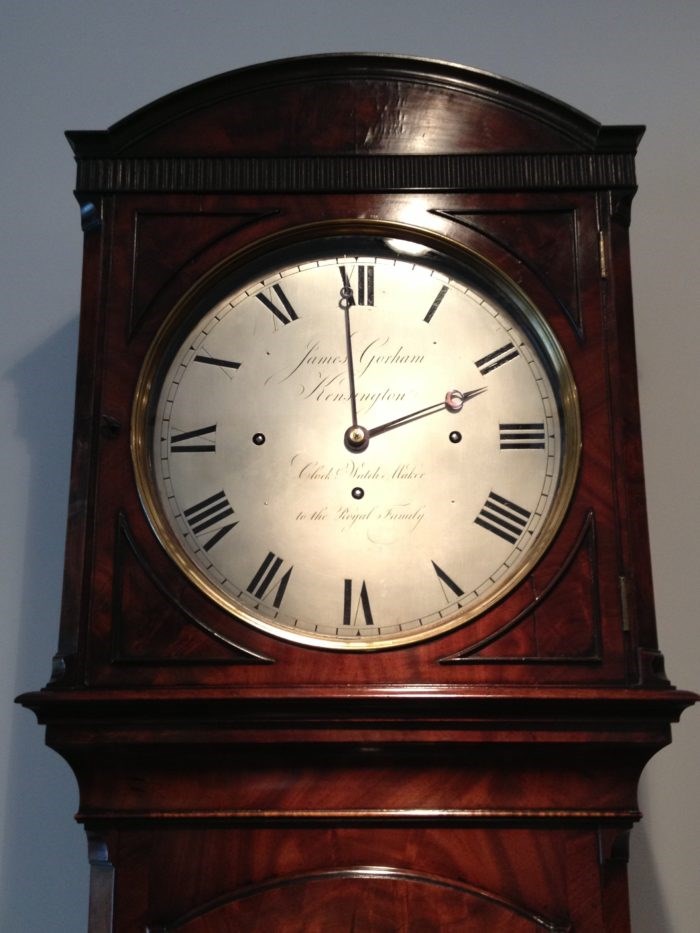 Detail of the Dial of the Gorham Longcase clock at Raffety Clocks. Photo by Tara Draper-Stumm 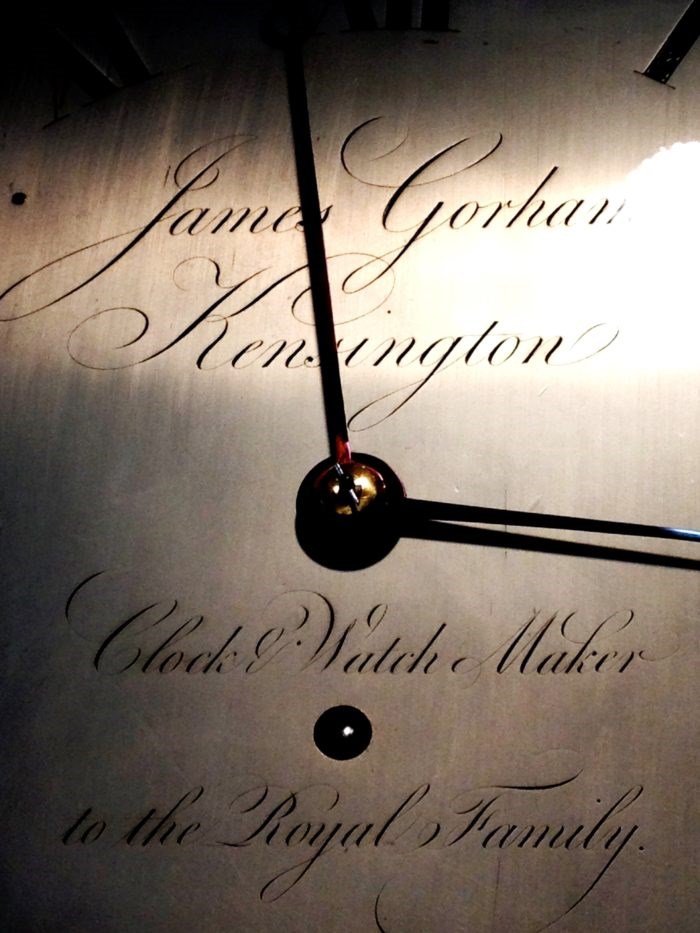 Both clocks are elegant and streamlined, without any excessive decoration, so much so that they seem to remind of the crisp lines of the Art Deco period a hundred years later.

A more unusual clock by Gorham is the famous astronomical skeleton timepiece he made in the late 1830s. This included clock driven celestrial and terrestrial globes made by J & E Cary of St James’s Street. It was first owned by the mathematician John Herepath, and was sold at Christie’s in 2003 for over £260,000. 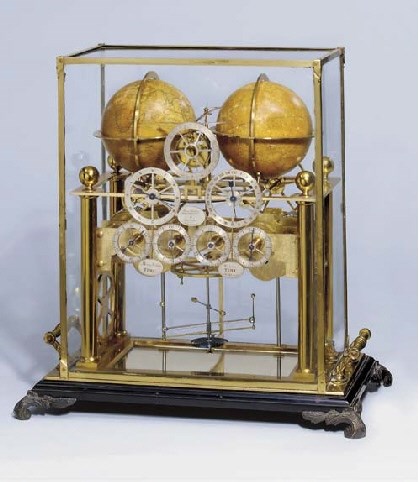 Of Gorham’s later years we know only a little. In July 1840 his name appears in the minutes of the central criminal court, after his home in the parish of “St Mary Abbot, Kensington” was burgled by John Wall, aged 49. Wall was found guilty of stealing a watch from Gorham, worth £2, and was sentenced to be “transported for 10 years”, presumably to Australia, for this crime.

James’s son Francis and daughter-in-law Harriet lived at 2 the Terrace in Kensington High Street, and Francis seems also to have worked also as a clockmaker and jeweller for a time. Francis did not have his father’s success however, and seems to have gone out of business by 1853.

Detail of James Gorham’s household entry in the 1851 Census.

James continued his business into the 1850s. In the 1851 census his shop was still situated at no.5 the High Street, and he had servant and a clockmaker/journeyman working for him. His will, dated 1856, the year he died, shows that he kept close ties with Kensington Palace until his death, as “Benjamin Betham of Kensington Palace” was named as one of his executors. More than 160 years after his death, his clocks continue to be highly prized by collectors both for their fine quality and royal associations.

** the longcase and four glass table clock made by Gorham and featured above are available for purchase at Raffety Clocks, 79 Kensington Church Street

Brian Loomes, Watchmakers and Clockmakers of the World (London, 2006)