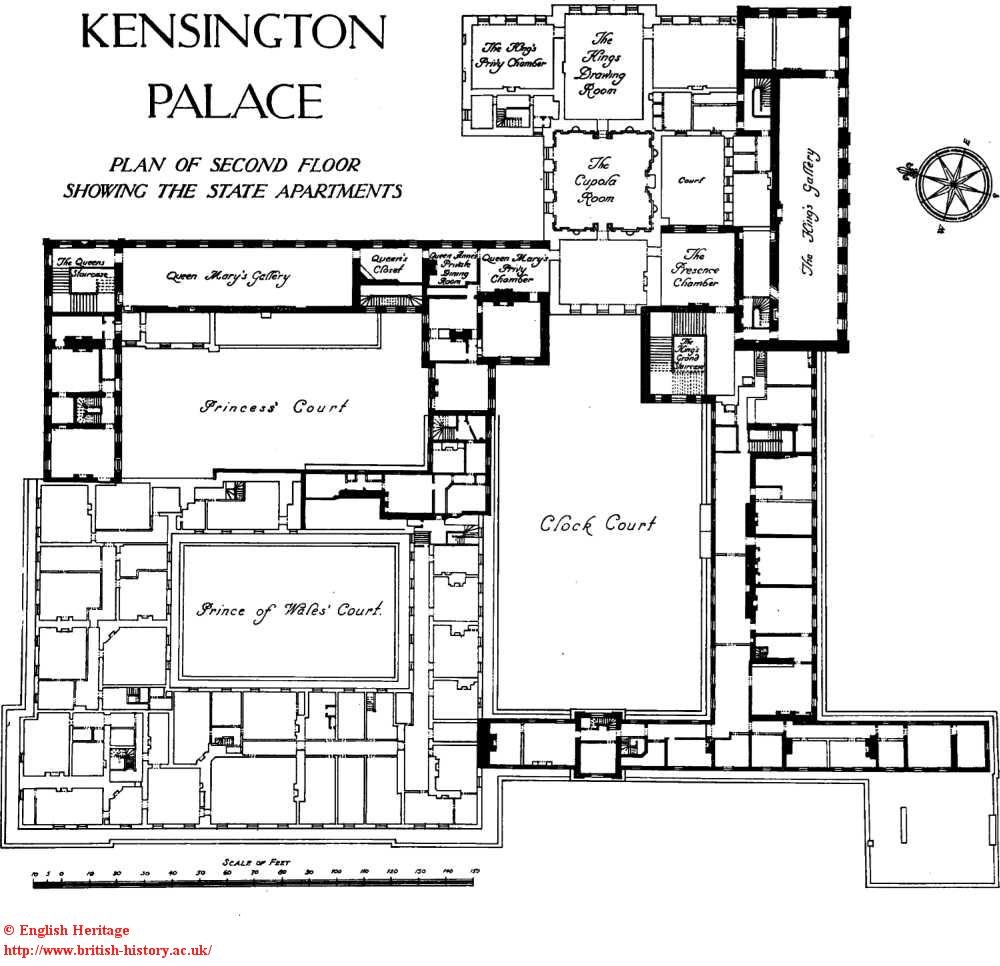 In the previous blog I wrote about Kensington Palace, its history and the people associated with it.  I now thought it would be a good idea to invite you all to join me on a tour of its atmospheric state rooms and the collections that furnish them. 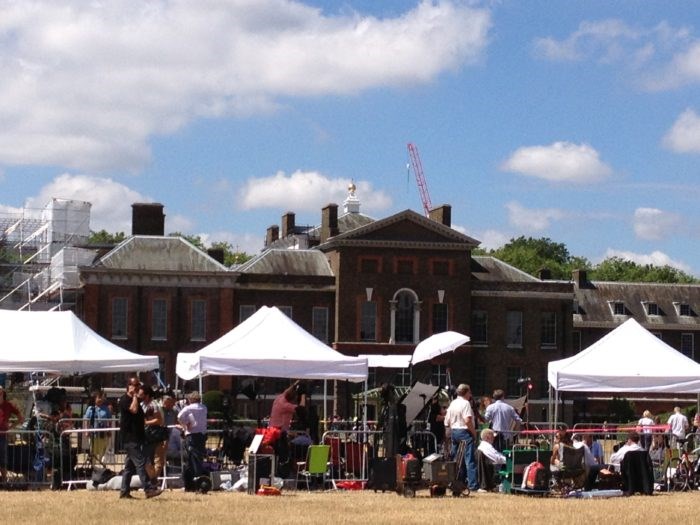 The World’s Media Camped Outside Kensington Palace after the Birth of Prince George of Cambridge. Photo: Raffety Clocks

Before we do that though, I am sure that the population of Kensington heartily celebrated the birth of the new Royal Prince, George Alexander Louis of Cambridge.  It will be the new heir to the British throne that will make his home amongst the leafy glades of Kensington following in his ancestor’s footsteps… 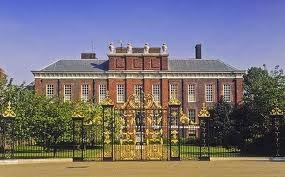 Kensington Palace has a warm feel to it; walking towards it you can see the mellow brickwork and the sunshine dancing off the tall casement windows.  Within is a different atmosphere caught by Historic Royal Palaces who are the custodians of the palace.  It is open seven days a week throughout the year and to capture the public’s imagination, the organisation has arranged the staterooms in such a way that one could almost be taking part in a play. 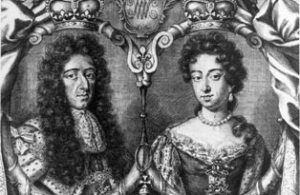 As you walk into the palace you can make a choice between visiting the rooms of Queen Victoria or choosing to return further in time to the reign of William III and Mary II, for whom the palace was built.  I chose to climb the Kings staircase to William’s lavish apartments but before I could enter them I had to negotiate the scaffolding as the splendid murals created for George I were being restored.  I could, however just take a glimpse at a few members of the new Hanoverian court peering over the superb balustrade. 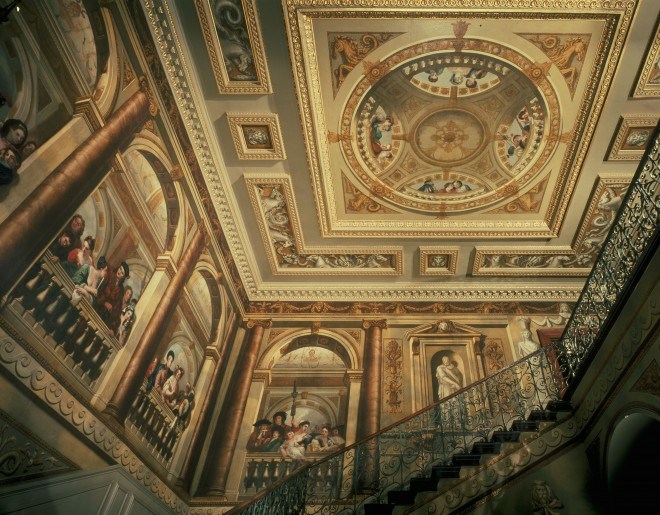 From the staircase you walk into the Kings Presence chamber and here is the beginning of the lavishly decorated rooms with sparkling golden ceilings painted by William Kent for George I.  There are a few relics dating from the time of William III, such as his baroque throne chair and beautiful needlework tapestries that adorn the walls.  It is the ceiling that I loved; ‘Grotesque’ in style with monkeys and fantastic figures in ornate fancy dress, all carrying garlands of flowers.  All the rooms are similar, tall casement windows, beautiful brocades and paintings that belong to the Royal Collection.  There are a few pieces of walnut furniture with fine marquetry veneers, some with the famous ‘oyster’ veneers that collectors love today, other pieces with seaweed marquetry.

To my mind though one of the best rooms in the state apartment was the famous Cupola Room.  This room is a cube with a coffered ceiling beautifully painted by Kent.   Gorgeous bronze and ormolu chandelier’s and stately figures stand to attention in the arched niches.  In the centre of the ceiling, if you wish to look upwards and crank your neck in the process, you can see and be reminded of exactly where you are and the family that the insignia represents. 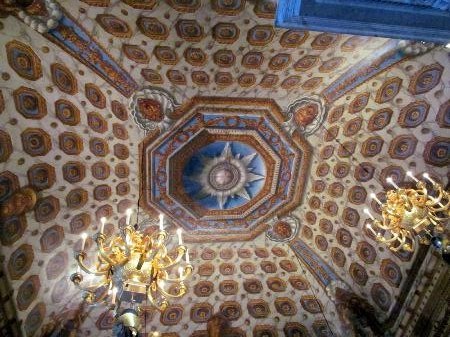 Here is the famous Garter Star with the Motto in French which will always send a shiver down my spine:

The translation: ‘SHAME UPON HIM WHO THINKS EVIL OF IT’

This garter star and motto will take you all on a journey to the court of Edward III who created this famous order of Chivalry in 1348.  It is Britain’s oldest order of chivalry and members include the Sovereign, the Prince of Wales and twenty four companions. 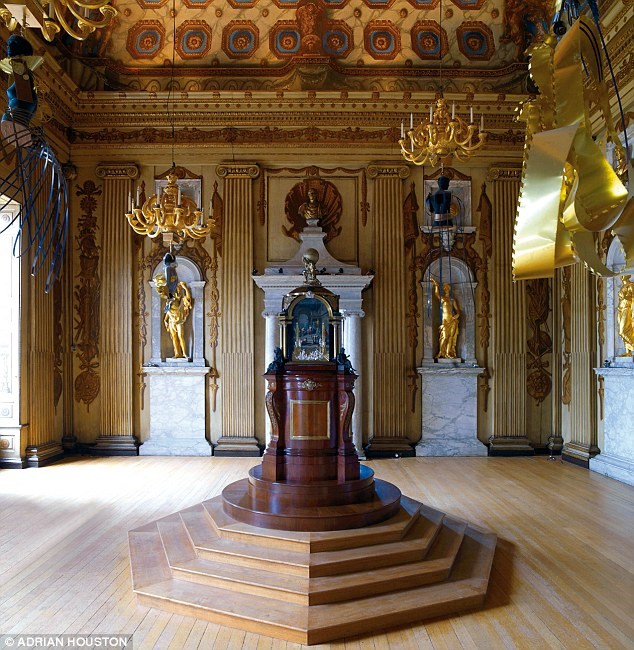 The Musical Clock in the Cupola Room.

In this incredibly beautiful room is an object which when created must have been so musical.  The Hanoverians loved music and the palace must have been a continuous musical soiree.  Frederick, Prince of Wales and his wife Augusta were passionately fond of the work of George Frederick Handel and if you visit the palace you can hear and enjoy music from the discreet amplifiers.  What took my breath away was the splendid free standing musical organ clock which is raised on a series of steps. 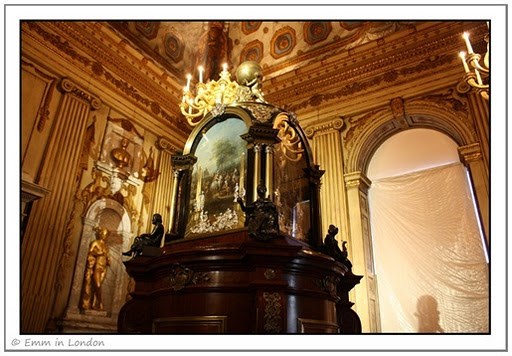 The Musical Clock at Kensington Palace, made for Augusta, Princess of Wales

It was created by Louis Francois Roubiliac for Augusta, Princess of Wales in 1743.  There are four painted dials depicting allegorical scenes by Amigoni and applied silver bas-reliefs by Rysbrack.  It is topped with a bronze group depicting Atlas by Roubiliac.  Sitting in the four corners are figures depicting four ancient Monarchies of the World.  The faces represent Assyria, Persia, Greece and Rome.

The maker of the clock was Charles Clay, who was established in London by 1720, near St Mary Le Strand.  In 1723 he was appointed Clockmaker to His Majesty’s Board of Works, in which capacity, in 1731 he made a clock for the gatehouse of St James’s Palace.  The clock in this room was completed after Clay’s death by John Pyke, a clock and watchmaker from Bedford Row.  He was apprenticed in 1710 and gained the Freedom of the Clockmakers Company in 1720.  The organ was removed in the 1800’s and was lost until the 1960’s.  The clock itself is still in working order.  Despite the losses this object is fascinating and really epitomises the early taste in musical clocks which were to be popular in the later years of the 18th century. 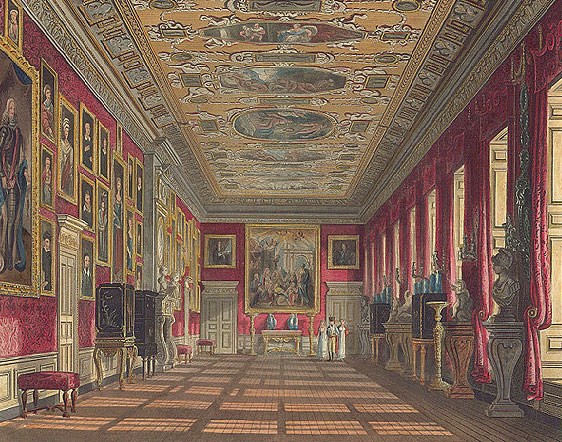 Following in the King’s footsteps you can allow your imagination to wander when strolling down the majestic long gallery.  The room is empty now of its furniture but the paintings that remain of William’s collection are hanging, uniform fashion upon the most gorgeous crimson damask wall paper that was recreated in the middle of the 1990’s.  The finely painted ceiling, again by Kent depicts scenes from the Odyssey. 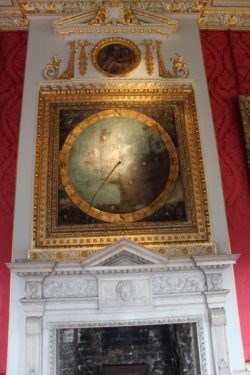 One thing that did catch my eye and that was the unusual Wind Dial which is situated above the fireplace.  It was devised for William III in 1694 by Robert Mordan who was a publisher, bookseller and maker of maps and globes.  Mordan was established from 1675 until his death in 1703, at the sign of the Atlas in Cornhill and later at New Cheapside.  The wind-dial is mounted in a gilded foliate frame.  The dial has spandrels painted with figurative scenes depicting the Continent’s and in the centre is a circular map of North West Europe.  Between the spandrels and map is a chapter ring with compass points and a metal pointer to the centre.  The pointer is connected by chains and pulleys to a wind vane on the roof. 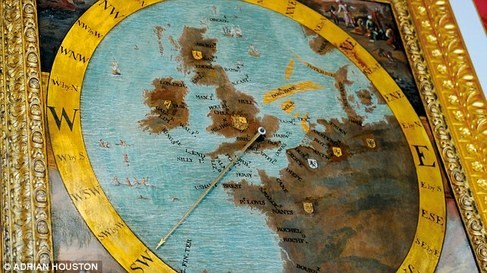 Detail of the Map on the Wind Dial, Kensington Palace

By looking at this wind dial the King could determine the way the wind was blowing, where his navy was likely to be heading and when the posts were likely to arrive.  The pediment and outer frame are later; it was all redesigned by William Kent for George I in 1725.  Today this unusual object is something of a curiosity as although it is in full working order, the pointer is disconnected from the wind vane on the roof for safety reasons.  The painting of the map is so fragile if, in the event, that the wind was strong, the pointer could disconnect itself and damage the canvas. 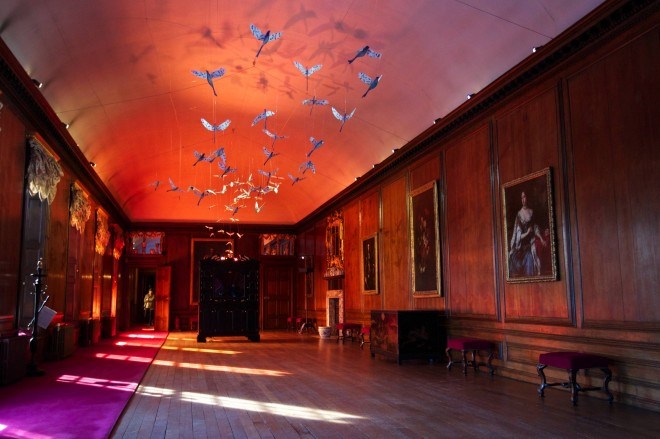 Leaving the apartment of William III I walked to the apartment of Mary II.  The staircase wasn’t as flamboyantly decorated as the previous one but there was beautifully patinated oak panelling.  I walked into another long gallery with a simply painted coved ceiling.  This room really brought back the magic of Mary.  The remains of her collection of porcelain in the ‘China taste’ were above door mantels and upon the chimney pieces.  The looking glasses were of carved and gilded wood and there was a selection of walnut stools and lacquered cabinets.  On the walls are a collection of paintings depicting court beauties as well as Mary herself.

On the far end of the gallery there was a piece of furniture that reminded every-one that this was a palace of music because one could see a magnificent organ cabinet, probably built by Benjamin Goodison for Augusta, Princess of Wales in the 1740’s.  It would have housed an upright harpsichord, and an organ known as a claviorgan.  Now it is a cabinet as so many like this were adapted for George III’s consort, Queen Charlotte by the court cabinet maker, William Vile.

The rooms are much simpler in taste in comparison to William’s but you can still feel that atmosphere that these rooms resonate today.  As I walked through the enfilade I stumbled upon a fine barometer by Thomas Tompion.

I suppose one couldn’t possibly visit a palace with so many connections to one Royal Couple who were attached to an age that symbolised the best of times for not only fine furniture but also for clock-making.  Thomas Tompion was established during the reign of Charles II and became one of England’s most famous of clockmaker’s.  There are many examples of his work in all the palaces but here, at the end of Mary’s staterooms was a beautiful barometer hidden away in a corner.

It is a wheel barometer made in walnut with gilt brass mounts, silver and glass.  It was later removed to Carlton House by George IV but luckily for Kensington it has returned home.  The barometer is topped by a finial of carved acanthus, the frame of the dial is carved with swags of husks and hops, below is a further acanthus, the dial is supported by scrolled and voluted open-work trusses.  Above the dial are two ormolu figures holding a rayed face of the sun.  Between them is a columned pediment with crossed palms and a putto’s head with a crown containing the cypher of William III.  The silver and matted gold dial has weather inclinations.  At the base is a subsidiary dial forming a twelve month perpetual calendar fitted with three adjustable rings.

Before leaving Kensington Palace and the world of William III and Mary II I decided to take a look into the rooms of the young Queen Victoria who was born at Kensington in 1819 and became Britain’s longest reigning Monarch.  This small apartment takes you through time to childhood memories, time spent with her mother in seclusion and then into young adulthood until she inherited the throne at the age of 18 in 1837.  You can almost live the young Queen’s life as there is so much on display about her.  Victoria’s marriage to Albert in 1840 and the birth of their 9 children is all recorded here. 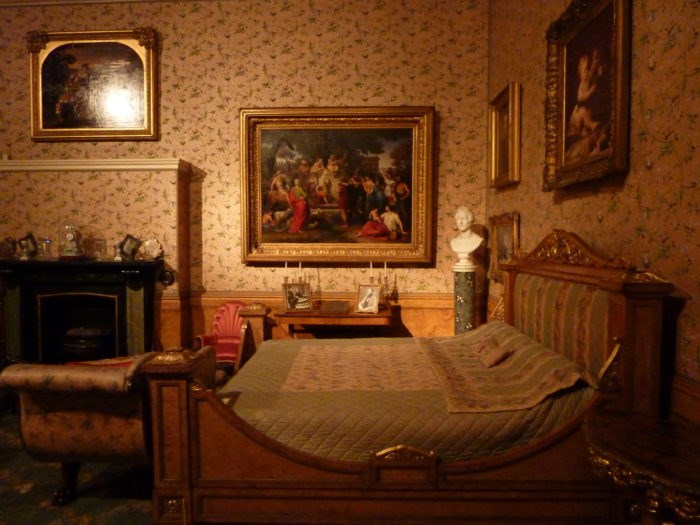 Towards the end of my visit there was one photograph which to me just about sums up what continuity is all about.  The photograph was dated 1894 and it depicted Queen Victoria holding her great grandson Edward Albert, known to the family as David, Victoria’s son, Edward Prince of Wales was standing behind her and standing to the Queen’s  left  was Victoria’s grandson, George, Duke of York.  Three Sovereigns in waiting to the throne. 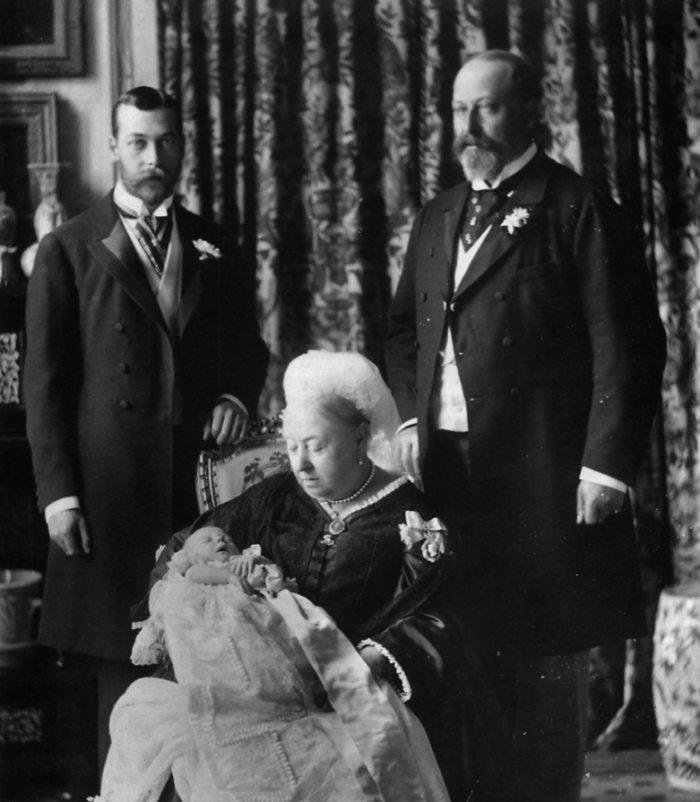 Photo of Queen Victoria with the future Kings Edward VII (right) and George V (left), then Duke of York and his baby son, the future Edward VIII

It struck a chord that 119 years later, Victoria’s great, great granddaughter, Elizabeth II is finding that history happily repeats itself!

The collection at Kensington may be small in comparison to other Royal palaces but it is a place that will bring the past happily back to life; stir the imagination and tickle the senses of the personalities that have made this mellowed red brick palace a place of complete enchantment.

By Stephen Wild of Raffety Clocks