A TASTE OF THE ORIENT PART 2: CLOCKS AND CHINOISERIE 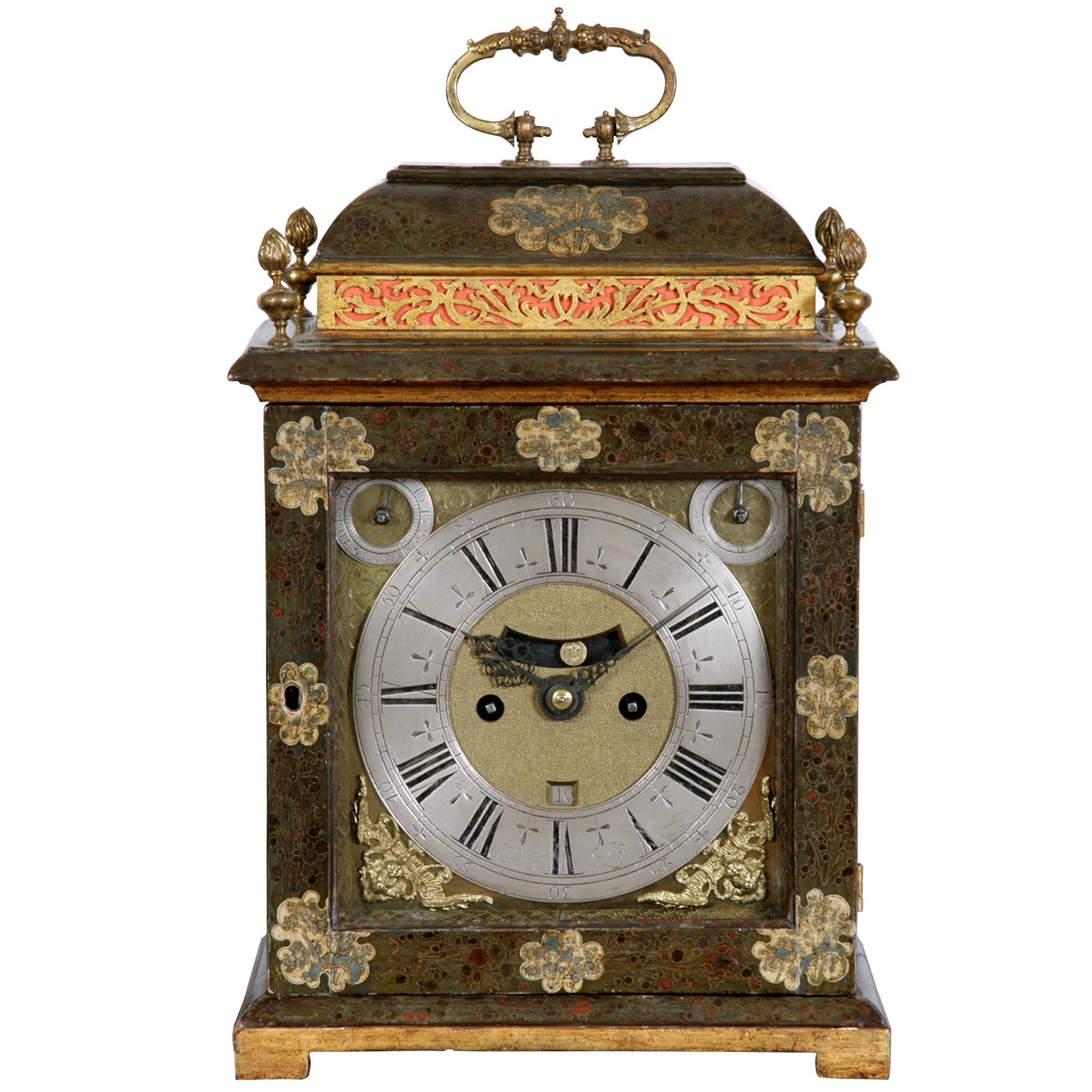 In an earlier article we wrote about the early examples of clocks and their makers during the reigns of William and Mary and Queen Anne.  One of them was Simon Du Charmes, who was a French Huguenot maker who came to London in 1688.  He became a Free Brother of the Clockmakers’ Company in April 1691 and was active at the Sign of the Clock in Charing Cross until at least 1704.  A fine and rare bracket clock by him is on display here at the shop.   The lacquered case is exquisitely decorated with floral sprigs set against a soft bottle green ground colour.  There is also a combination of reds and pale blues.  Around the door of the dial is decoration depicting shaped cartouches on a yellow ground with sprigs of flowers.  Only time has subdued the colours of this clock as when it was made in 1695 the richness of the colours would have made it very bright and colourful. 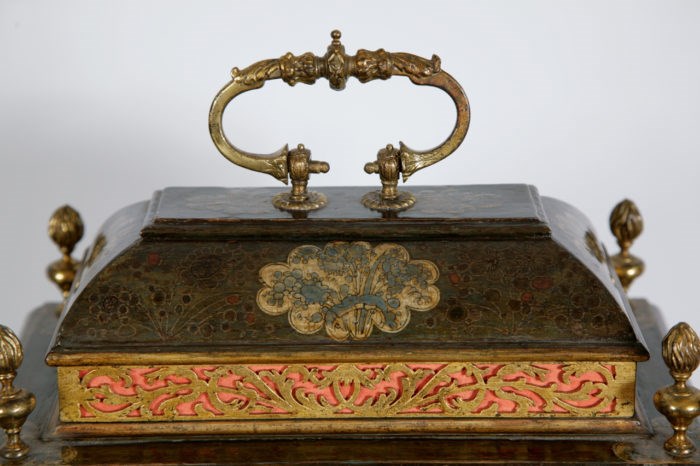 Detail of the caddy top of the clock by Simon du Charmes. Raffety Ltd. 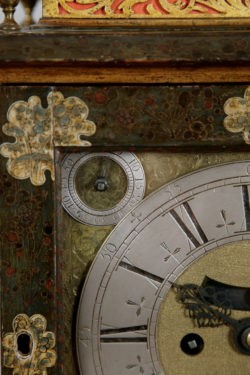 Detail of the Lacquer and Clockface of the Simon du Charmes Bracket Clock. Raffety Ltd

Leaving the age of William and Mary one can still find examples of lacquer here at the shop.  If you let yourself walk into the period of George III you will find a splendid longcase clock by John Monkhouse, London.  The case is profusely decorated in the japanned chinoiserie style.  The overall ground colour is green.

The trunk and base is a poem of gilded horseman, colourful figures sailing on imaginary lakes, village landscapes with flowers and trees, all raised to give that three-dimensional effect.  There are the famous ho-ho birds in polychrome colours; it is a clock that epitomizes the climax of Chinese chinoiserie taste.  The hood has a pagoda top which is also decorated in red, green and gold.  It must have been made for an important house as it is very tall as if designed for a great room.  John Monkhouse was established in London from 1756 to 1771 and he was known for his fine musical longcase clocks and for automata clocks. 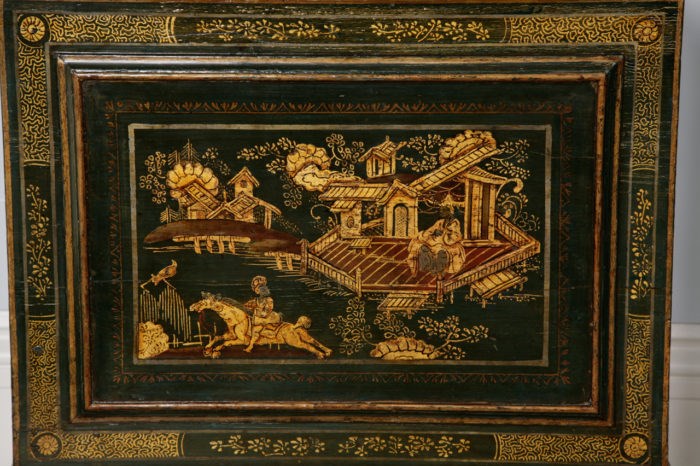 Detail of the base of the Longcase Clock by Monkhouse. Raffety Ltd 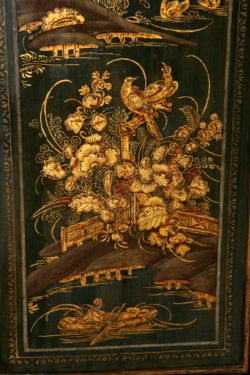 Another bracket clock that is in the collection is one by John Parker of Greenwich.  It is an absolute gem as far as the decoration of the case is concerned.  It literally sparkles at you as the decoration is sea-green and gold.Like the Monkhouse longcase, the Parker example is profusely decorated with flowers and foliage and charming figures in the bell top as well as down the sides of the front door. 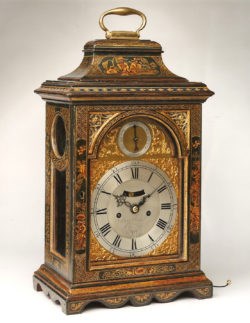 One would refer to it as whimsical chinoiserie, very pretty.  The clock has a superb gilded dial with gilt spandrels in the four corners and the silvered chapter ring is signed in a florid script by the maker.  All in all, the Parker is an attractive clock of its period. 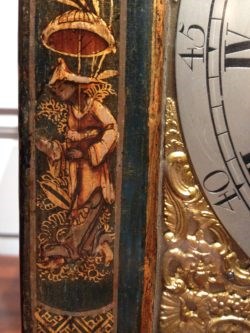 Detail of Lacquerwork on the Parker Bracket Clock. Raffety Ltd.

Departing from bracket and longcase clocks you can still not escape the whimsical nature of japan work and chinoiserie.  Take a further look and you will spot fine wall clocks known as ‘Act of Parliament’ clocks or Tavern clocks.  The actual act of Parliament took place much later than when these clocks were made.  It was known as the Duties on Clocks and Watches Act 1797, instituting a tax on clocks and watches.  It was a tax which almost ruined the trade as demand for clocks decreased and many people were made unemployed.  The tax was repealed within a year in 1798.  There are three examples here at Raffety and all have the signature lacquer case work.  It is only when you look more closely at the decoration that you will see that each has a personality of its own. 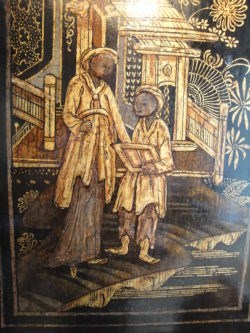 Detail of Figures and Landscape on the Trunk Case of a Tavern Clock by Thomas Green, Baldock. Circa 1775. Raffety Ltd. 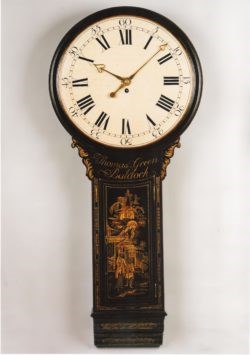 The three tavern clocks here all date from the reign of George III.  They all follow a similar style with the trunk doors painted in gold on a black background.  The chinoiserie decoration on each of them is different.  Each one has a story to tell.  There are elegant figures of ladies standing in a classical setting with weeping willow trees and arcaded walks, another example has plump doves sitting on a latticed ledge with a dog by a well below them; amusing unsophisticated scenes but beautifully drawn.  The dials on two are typical in plank form with simple gilt leaf decoration whilst the third example, by Green (above) has a white dial.  What is interesting though is the traditional Japanese motif, the Chrysanthemums, which decorate the sides of the cases.  The artisans must have taken inspiration from the decoration on the imported Chinese ceramics when decorating these fine timepieces. 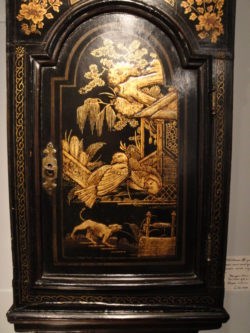 Detail of Lacquer Decoration with Animals in a Landscape on a Tavern Clock by John Johnson, London. Circa 1760. Raffety Ltd. 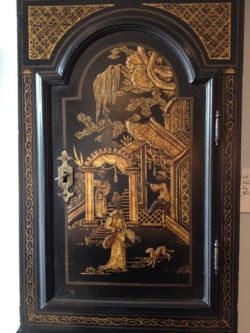 Detail of Lacquer Decoration, with a Figure in a Pavillion with Landscape. Tavern Clock by John Everell, London. Circa 1765. Raffety Ltd.

Chinoiserie lasted well beyond the mid-18th century. The Prince Regent wanted a place to escape to and a little villa in Brighton was perfect.  It was Henry Holland who was first tasked with rebuilding what was once a farm house into a classic villa, but never known to be abstemious, the dashing ‘Prinny’ wanted a ‘little extra’.  When the Prince Regent inherited the throne in 1820 he employed the architect John Nash to create what to me is a fabulous palace dedicated to the chinoiserie style. 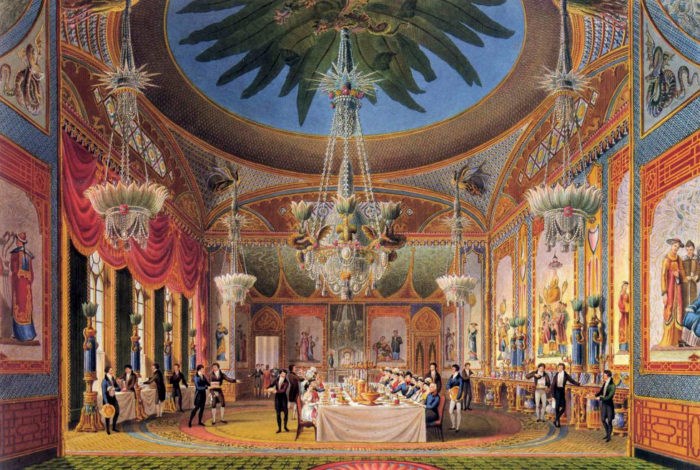 The Banqueting Room at Brighton Pavillion.

There you will visit a palace which will awaken the senses and send your imagination flying off into space when you walk into the amazing place dedicated to the arts as well as lively pleasures and entertainments.  You will stumble across a complex collection of French, English and Chinese export furniture and objects.  There are state rooms which are adorned with Chinese wall paper and dangerous looking dragons which are richly gilded and slither down columns, to carved palm trees and imitation bamboo. 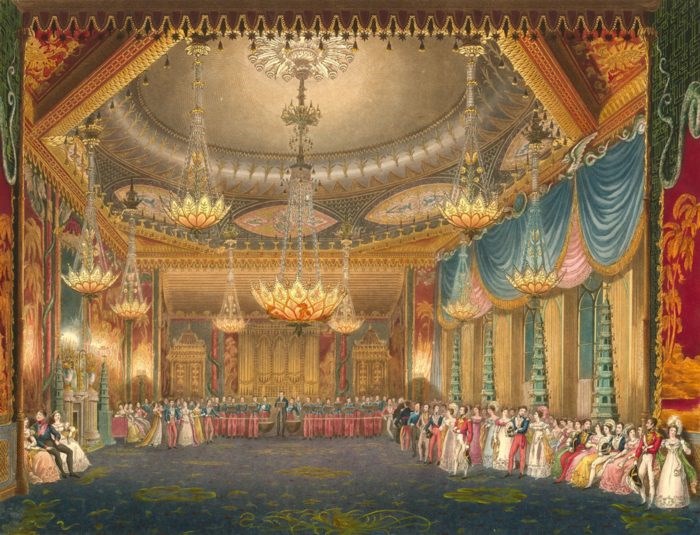 The Music Room at Brighton Pavillion.

The interiors of the Pavilion were outstanding and gorgeous for the period after the cool restraints of Neo-Classicism but to end this article on a flamboyant note you must take a look at two clocks in the Royal Collection that really reach the climax of the Prince Regents taste in chinoiserie.  One of them is the Chinese Drummer Boy mantel clock which used to be in the Prince’s London residence, Carlton House.  It is pure fantasy with a Chinaman sitting on a cushion, under a canopy, which is flanked by rococo palm fronds. The pagoda top is topped by a fish, a motif that was used in decorative objects in the pavilion.

Another example is really the crescendo in Chinese taste.  It is a clock known as the Kylin clock.  A Kylin was an animal used in Chinese pottery.  This example is a riot of gilt bronze flowers and foliage depicting lotus and sun flowers entwined around the kylins and above the dial of the clock.   As one can imagine it is not a clock you would miss, it stands just over three feet high and is 2 feet 9 inches wide.  It certainly epitomizes the taste of the time and was made to stand in the Saloon at the Pavilion. 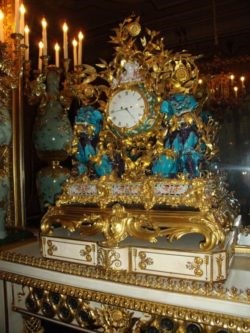 It is a Taste of the Orient, flamboyant, artistic, colourful and very, very different.  It was this sense of the exotic or ‘other’ that made chinoiserie so fashionable in the 18th and early 19th centuries.

* The Clocks above, except for those labelled “royal collection” are all available for purchase at Raffety Ltd, 79 Kensington Church Street