While Raffety is well-known for its impressive collection of 17th and 18th century English clocks, we do occasionally sell fine horological examples that did not originate on our island. One such example currently in the gallery is a fine early 19th century figured mahogany longcase clock by Aaron Brokaw of New Jersey (1768-1853). 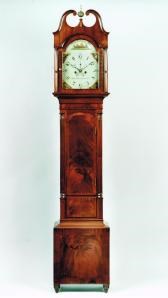 A Mahogany longcase Clock by Aaron Brokaw, circa 1830-40. Raffety Ltd

Probably dating to about 1810, this longcase clock is typical of its time, with a scrolled swan neck top with central brass finial, above an arched gazed door, flanked by mahogany turned pillars.The case has an unusual segmented trunk door, with contrasting banding, flanked by fluted columns. The clock stands on a square base, supported on turned feet. 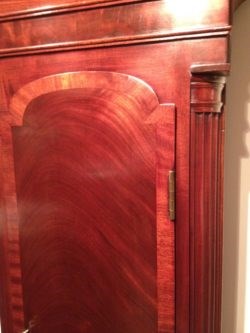 The movement with anchor escapement is of 8 day duration, and strikes on a single bell. The painted arched dial is decorated with fruit, flowers and shells, with Arabic numerals, two brass ringed winding holes, a subsidiary dial, and date aperture. It is signed in script below the date aperture, “Aaron Brakow, Rahway, NJ.” 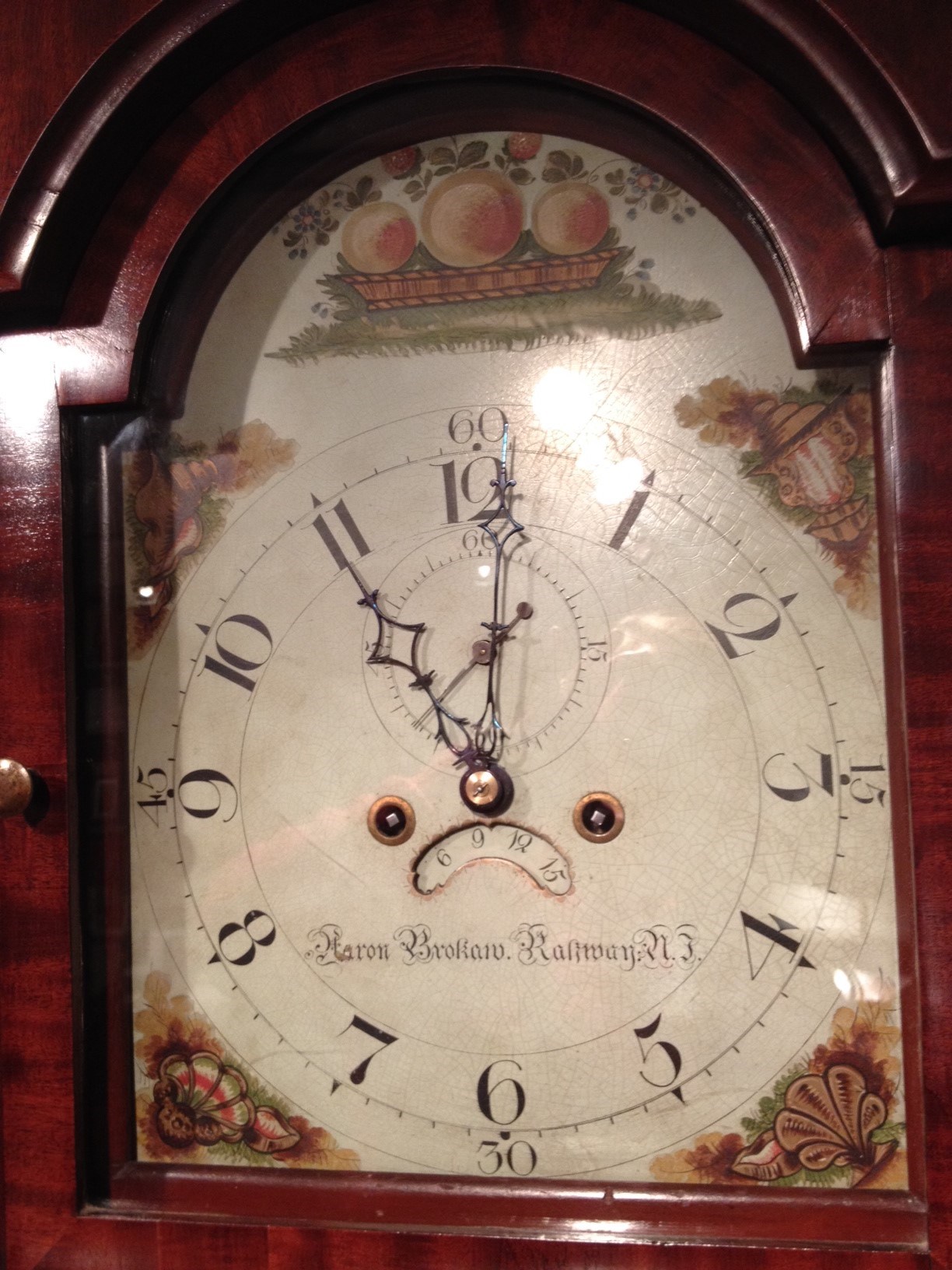 What makes this clock really interesting is the family of its maker, for Brokaw was from an illustrious line of colonial clockmakers.  His grandfather, Aaron Miller (died 1777), after whom he was named, was a clockmaker of some note in Elizabethtown, New Jersey. Miller had lived in New York before setting up his business in Elizabethtown. The New York Gazetteer (November 23, 1747) described Miller  as “a clockmaker in Elizabethtown [who]…makes and sells all sorts of clocks after the Dutch manner…he likewise makes compasses and chains for surveyors.”

Miller produced a clock to hang in the First Presbyterian Church in Elizabethtown in 1759, which cost £10 5s 9p. Isaac Brokaw, Aaron Brokaw’s father, had been apprenticed to Miller in about 1759. Isaac married Miller’s daughter Elizabeth in 1764. On Aaron Miller’s death in 1777  Isaac Brokaw inherited Aaron Miller’s clock-making tools.

Aaron Brokaw would appear to have taken up an apprenticeship under his father from the 1780s. Isaac and Elizabeth moved their family to Bridge Town, New Jersey around 1790, and Aaron continued to work alongside his father, with his first clocks being signed “Aaron Brokaw, Bridge Town”. He took over his father’s business upon his death in 1826. 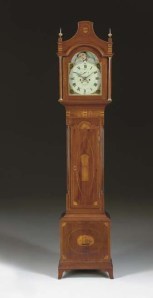 Aaron Brokaw was certainly not the last of this respected family of clockmakers – his uncle Cornelius Miller and cousin Kennedy Miller were also clockmakers of note. Kennedy Miller also worked in Elizabethtown, so it may have been too many clockmakers in one place that prompted Isaac Brokaw to move to Bridge Town.

Clocks made by these three generations of clockmakers are elegant, stylish and of the finest quality. Isaac and Aaron Brokaw appear to have used the best cabinet makers in New Jersey to produce exquisite cases for their clocks, sometimes in New England walnut or imported Caribbean mahogany, and occasionally with decorative marquetry inlays. These were very much influenced by designs and fasions that were popular in England, though generally styles seemed to linger longer in America, possibly as there was a delay in the latest designs reaching the former colonies. The Brokaws are thought to have used Matthew Egerton, a renowned cabinet maker from New Brunswick, New Jersey, for some of their cases, as well as Rousett & Mulford of Elizabethtown. Aaron may also have worked in association with John Scudder, a cabinet maker based in Westfield and Rahway (who sometimes retailed his own clocks, having made the cases and bought in the movements for them).

Aaron ordered at least some of the painted dials for his clocks from the Osborne Factory in Birmingham, England. Birmingham was the centre for enamelled and painted clock dials from the late 18th century onwards. Clocks by Aaron Miller as well as Isaac and Aaron Brokaw appear on the market from time to time in the United States, where they are highly prized, but it is rare to find one on this side of the “pond”.

The only other facts we have about Aaron Brokaw are that he fought with the Middlesex Militia (Middlsesex County, New Jersey) in the War of 1812 and was married to Elizabeth Tucker (1774-1854).  He continued to make clocks after his father’s death in 1826,  and may also have worked with his younger brother John Brokaw, who is known to have trained under their father as well. Aaron Brokaw died on December 18th, 1853 and is buried in Rahway Cemetery.

The mahogany longcase clock by Aaron Brokaw currently on display at Raffety, 79 Kensington Church Street, is a wonderful example of the American federal period, but it also illustrates that early American clockmakers were often as highly skilled as their English counterparts, and took great pride in passing their skills on to the next generation. In the process they created some very fine clocks for the growing elite of a new nation.

* The mahogany longcase clock by Aaron Brokaw illustrated above is available for purchase at Raffety, 79 Kensington Church Street.