A Regency gem of a clock is one of the latest additions to the shop.  Small but beautifully formed the classically styled gazed case is veneered with red tortoiseshell and inlaid with scrolled and flowing stem and flower decoration. Not only a delight to look at, this mantel timepiece is also a product of one of the most celebrated dynasties of London clock-makers – the Webster family. 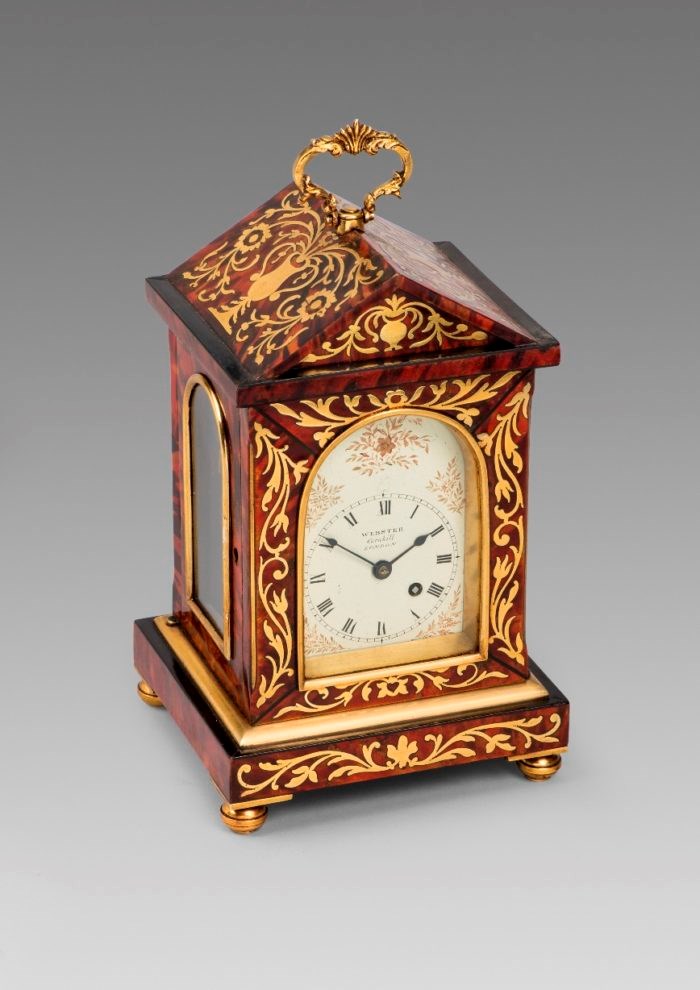 The arched dial is decorated with delicate flowers and leaves and is signed WEBSTER Cornhill LONDON. From the style of the clock and this inscription we can fairly accurately date it to c.1820. The Webster in question is Richard Webster, the second in a series of Richards, who moved the family business from 26 Exchange Alley to 43 Cornhill around 1813. The company traded from 43 Cornhill and later 74 Cornhill. 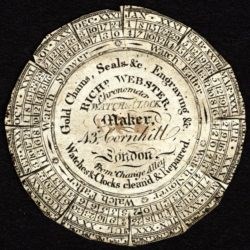 By tracing the Webster family through the generations, and almost 200 years of continuous business, we can reveal the trends and trials of British clock-making during its most illustrious centuries. The Webster’s business was first established in Exchange Alley in 1711, just off Cornhill and the nearby Royal Exchange. In the subsequent years the shop relocated a number of times, but never moved far. For well over 100 years, up until the late 1800s, the Websters traded within striking distance of Cornhill. Cornhill was a bustling area packed with coffee houses and shops, from barbers to bootmakers, booksellers to bankers. A number of chronometer, watch and clock makers had their businesses in the area – the Webster’s were in good company.

Richard had rather esteemed relatives. Robert Webster (the first member of the family recorded in the Clockmakers’ Company) was elected Master of the Company in 1704, the year after the ‘Father of English clock-making’, Thomas Tompion. Close relation William Webster was also well acquainted with Tompion as he completed his apprenticeship under him and later served as a journeyman (an independent maker working within the master’s workshop). It was this William Webster who founded the family business in 1711.

William Webster I celebrated his connection with Tompion in an advertisement placed in the London Gazette on the 24 November 1713 just a few days after Tompion’s death. He clearly wishes to appeal to previous clients of the late Master and reassure them that he is capable of providing the same quality of craftsmanship. Similarly, he paid respect to his friend in a reference engraved on the back-plate of one of his miniature clocks. 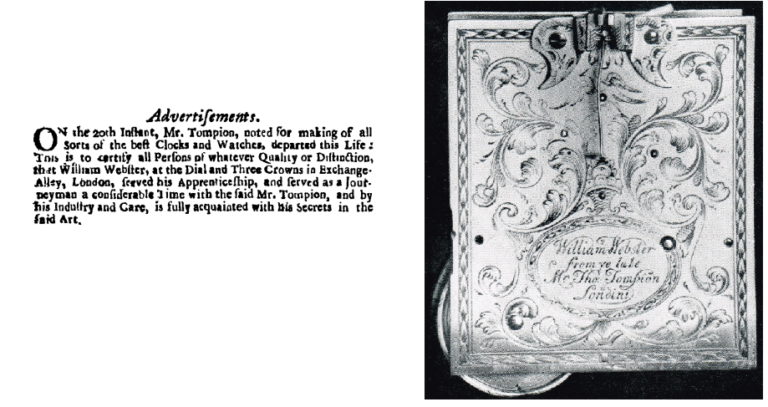 Next in line to run the family business was William Webster’s son, also called William. Here at Raffety we have had the pleasure of selling a number of exquisite William Webster II clocks, a few stunning examples of which can be seen illustrated below.

William II was admitted to the Clockmakers’ Company in 1734 and elected Master in 1755. Yet in the intervening years his business was almost destroyed by a ferocious fire that swept through Exchange Alley and Cornhill.
In the early hours of Friday 25 March 1748 a fire started in a wig-makers shop in Exchange Alley. The fire continued to burn for a further 12 hours and caused widespread damage and destruction. We can see from maps produced at the time that Webster’s shop was one of those damaged, no doubt a devastating blow to the business.

Crop of a map which details the fire which began in Exchange Alley Cornhill, on Friday March 25, 1748 Ⓒ The British Library 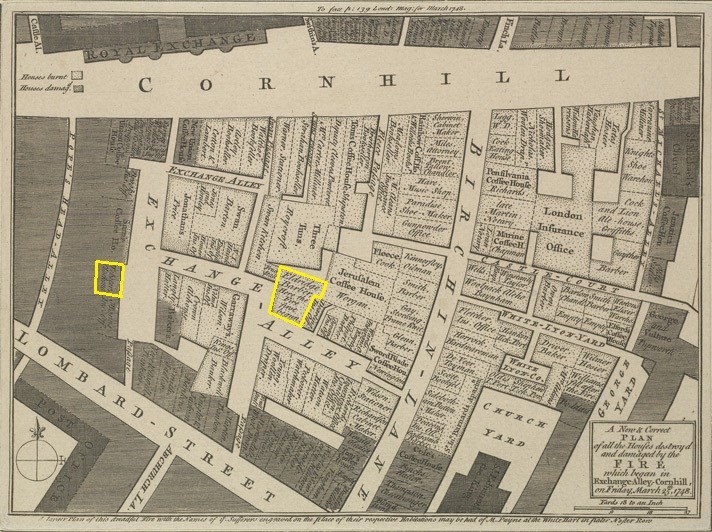 ‘A New and Correct Plan of all the Houses destroy’d and damaged by the Fire which began in Exchange Alley, Cornhill on Friday March 25, 1748’ Webster’s shop (left) and the start of the fire are highlighted Ⓒ The British Library

The Websters narrowly escaped a further fire on 7 November 1765 which gutted parts of Bishopsgate Street and the Leadenhall Street end of Cornhill. Nevertheless, the Webster family of clock-makers persevered and thrived.
Arguably the most successful member of the family was yet to come. Richard II, the maker of our tortoiseshell clock, was William II’s grandson. Under Richard II the business seemingly went from strength to strength, at one point occupying two premises – at 74 Cornhill and at nearby 3 Birchin Lane. The Webster name was so well known by now that the surname alone would suffice when signing clock faces, back plates and watches.

Richard II was chronometer maker to the Admiralty and to the East India Company, a high honour (see Davidson). It is also thought that he acquired the business of another clock-maker, Thomas Moss, after his death in the 1820s. From what we can ascertain, Richard II was a prosperous businessman who expanded the business and upheld the Webster name in the world of horology.
The business continued to be run for a further two generations after Richard II, but trade slowly declined and the Webster’s ceased trading in the early 20th century. It is clear that the Richard Webster II was at the top of his game. His workshop produced beautiful clocks in a range of styles, the quality of which can still be appreciated to this day. 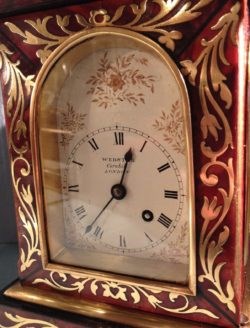 Detail of the dial on the tortoiseshell mantel timepiece by Richard Webster II. © Raffety Ltd

With every tick this decorative mantel timepiece represents not only some of the finest craftsmanship of its time but also the culmination of more than 100 years of clock-making knowledge and history. The Websters were one of the greatest clock-making dynasties of the 18th and 19th centuries and this clock is testament to their achievements.