THE CABRIERS: HUGUENOT CLOCKMAKERS IN LONDON

One of the great treasures in our gallery at present is a fine William and Mary period walnut and marquetry longcase clock by Charles Cabrier of London, dating to about 1690. The well-proportioned case has cross grain mouldings and walnut panelled sides. The trunk door and matching base panel have beautifully executed marquetry panels of flower with birds and figurines with outstretched arms. The flat-top hood with overhanging cornice is flanked by gilt capped barley twist columns.


The 11in square dial is surrounded by cherub and foliate spandrels and there is a silvered chapter ring with individually numbered minutes. The dial is signed ‘Carolus Cabrier Londini fecit.’ The five-pillar movement is of 8-day duration and has an inside-countwheel for the hour strike on a bell. 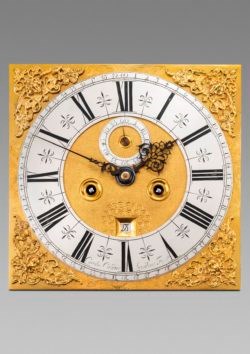 Detail of the dial on longcase clock by Carolus Cabrier, with gilt spandrels. Raffety Ltd.


The clock had been in the same family collection since 1937, when it was purchased from George Neilson Antique dealer of Holyrood Square, Edinburgh. The original receipt is sold with the clock. 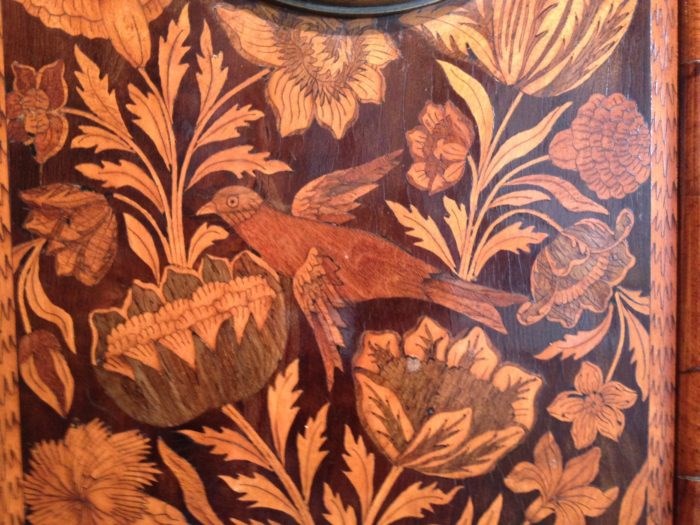 Detail of marquetry decoration on longcase clock by Carolus Cabrier, with bird and flowers. Raffety Ltd


The stunning marquetry shows the influence of Dutch design and craftsmanship that was prevalent during the Restoration period, while the floral decoration hints at Queen Mary’s passion for flowers and gardening – both of which had an impact on fashion at the time. 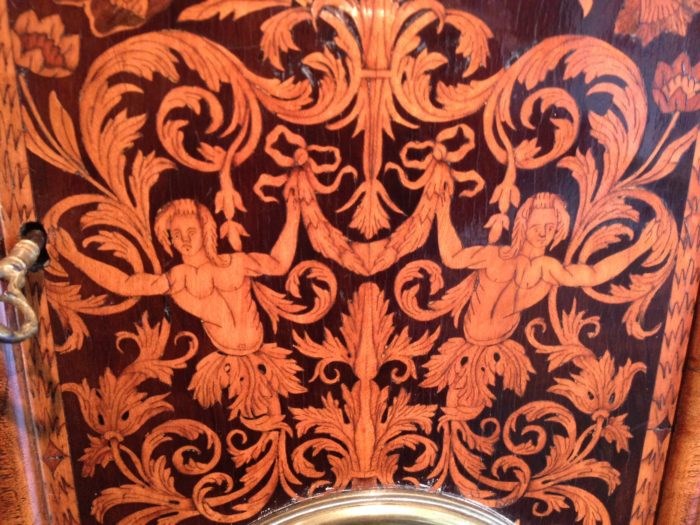 Detail of marquetry figures and floral arabesques on the longcase clock by Carolus Cabrier. Raffety Ltd


Charles Cabrier, sometimes called Carolus Cabrier, was the first of three generations of clockmakers of the same name. As his surname would suggest his family were French Huguenots, probably from Lyon, who emigrated to England after the revoking of the Edict of Nantes by Louis XIV in 1685.
Charles was admitted to the Clockmakers’ Company by redemption in 1697/8. He was married at least twice, first to Rebecca, in 1699, with whom he had at least two children, including Charles II, who was apprenticed to him in 1719. He married secondly Mary Fenwick in 1713, and had further children. He is thought to have worked at the Dial, Tokenhouse Yard, near St Margaret’s, Lothbury in the City. His will, proved 13 July, 1736, left a third of his estate in equal shares to his four surviving children, John, Charles, Rebecca and Mary, with his wife Mary acting as executor. The will included mention of an existing indenture of £600 relating to the surviving children of his first wife Rebecca. Charles Cabrier I was buried at St Margaret’s, Lothbury. 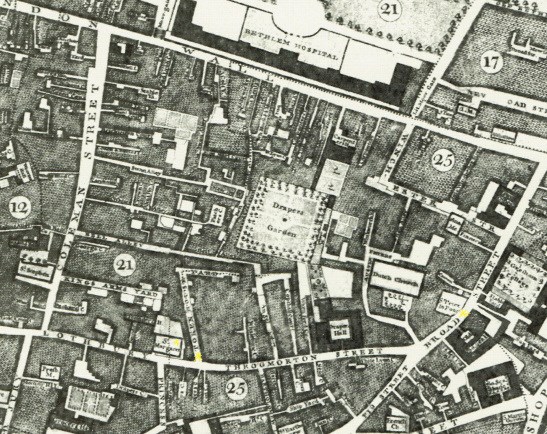 Rocque’s 1746 Map of London showing St Margaret’s Lothbury, Tokenhouse Yard and Broad Street (marked in yellow). Both Charles I and Charles II Cabrier worked in this part of the City.


His son, Charles Cabrier II, was also a talented clockmaker, making clocks and watches for both the domestic and export markets. We also have a stunning example of his work in the form of an elaborate ebony & gilt George II period bracket clock, with moonphase indication and alarm, dating to about 1730. 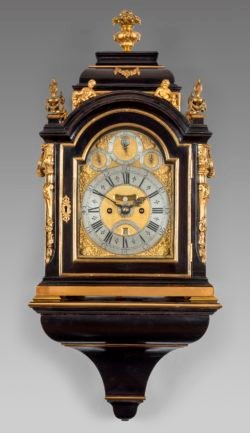 
The compact ebonised case is in an exuberant baroque style with scrolled pilasters to the four canted corners. The glazed sides, front and rear doors are all framed by gilt mouldings. The swept caddy-top with four flambeaux finials had a fretted gilt lattice surround and is surmounted by a single larger urn finial of individual design. The whole is raised on moulded block feet and sits upon a bespoke matching wall bracket, with integral winding key drawer. 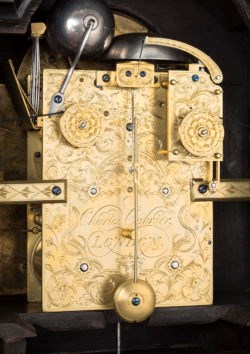 
The movement with verge escapement and hour strike has an exceptionally well engraved backplate of scrollwork surrounding the makers’ signature. There is also a pull-quarter repeat mechanism playing on a further nest of six bells. The gilt dial is fully signed on the matted centre with mock pendulum and date aperture. The arch displays three subsidiary dials, the central one showing the changing phases of the moon. 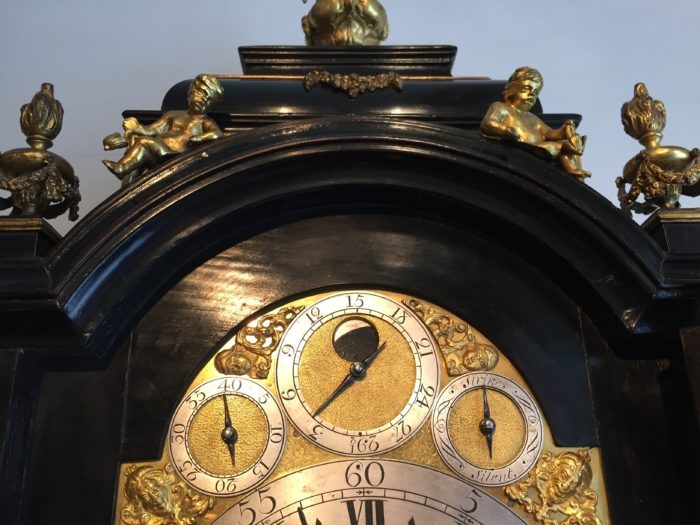 Detail of the subsidiary dials and moonphase in the arch on a bracket clock by Charles Cabrier II. Circa 1730. Raffety Ltd


Following his apprenticeship under his father, Charles II was made free of the Clockmakers’ in 1726. He would play an active role in the Clockmakers’ Company over many years and became Master in 1759. He seems to have been based at 79 Broad Street from 1743 onwards, although he was described in 1754 as working ‘behind the Royal exchange’ a popular area for clockmakers’ shops, just to the south of Broad Street.

He was certainly very successful, producing clocks and watches for both the UK and more specialist export markets, and is thought to have supplied a pair of lacquer-cased musical automata clocks for the King of Nepal in 1770 (see Barber, p.164, plate 27.). He continued to work into the 1770s, and died in 1776, leaving a substantial estate to his surviving children Charles III, also a clockmaker, and daughter Rebecca, along with bequests to his sisters Rebecca and Mary. 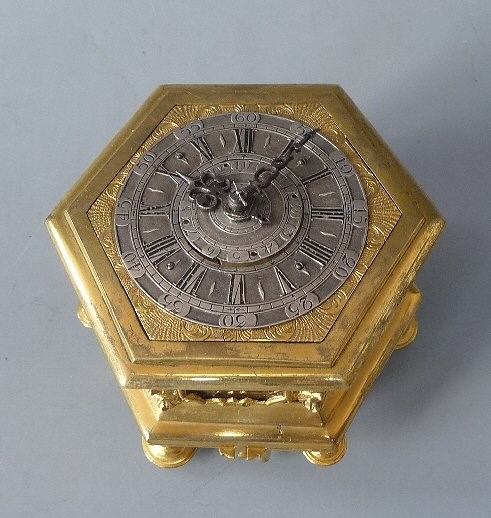 
Examples of clocks and watches by Charles I and Charles II Cabrier can now be found in museums and private collections around the world. One fine example of is a small hexagonal striking table clock with a solid silver dial by Charles Cabrier II, dated to 1760 in the collection of Van Dreven Antiquair. The exquisite verge escapement movement with balance wheel is beautifully engraved and signed “Cabrier London.” 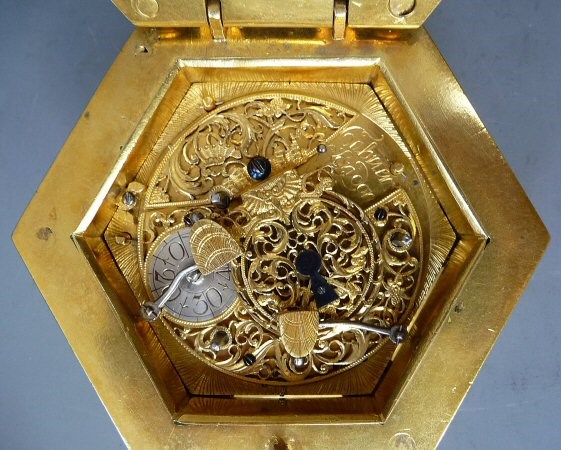 Detail of the movement in the hexagonal table clock by Charles Cabrier II. Circa 1760. Courtesy Van Dreven Antiquair.


A walnut longcase clock by Charles Cabrier II is in the collection of the Huguenot Museum in Rochester, Kent. A jewel encrusted watch on a chatelaine, by Charles Cabrier I, is in the State Hermitage Museum, St Petersburg (inventory number 3404).  The great financier and art collector JP Morgan owned at least 5 watches by Charles Cabrier II, which are now in the Metropolitan Museum of Art in New York (Accession numbers 17.190, 1458,1459a,b, 1460, 1461, 1510a). All these examples testify to the diverse skills of both father and son.

The work of both Charles Cabrier I and II illustrates the incredibly high calibre of clocks and watches being produced from the late 17th century into the reign of George III in London’s clockmaker’s workshops. The arrival of so many skilled Huguenot craftsmen like Charles Cabrier I in the last decades of the 17th century was a huge boost to London’s trades and industries, and would help ensure London kept its place as the premier centre for clock-making into the industrial age.

By Tara Draper-Stumm with contributions by Nigel Raffety

*The authors would like to thank the staff and volunteers of the Huguenot Museum, Rochester for their assistance confirming facts and dates above.

*Thank you to Fred Van Dreven of Van Dreven Antiquair for permission to use images of his clock.