While 17th & 18th century English clocks & barometers are the mainstay of Raffety’s business, for many years we have also specialised in fine English furniture of the period. The styles and craftsmanship of the 18th century make furniture of this era among the most highly prized by collectors. There has probably never been a better time to look again at Georgian furniture – not only does it offer the most versatile pieces for both modern and historic interiors, but the dip in the pound against the dollar have made it more affordable.

Georgian craftsmen benefited from working during a period of booming trade and supreme architectural design, with a growing consumer market eager to buy all sorts of furnishings. Trade with colonies in North America, the Caribbean and India was increasing in the mid to late 18th century and Georgian craftsmen could make use of a stunning variety of woods imported from far afield to create magnificent pieces of furniture. Traditional oak and walnut continued to be used, but mahogany, with its subtle colours and figuring, became the wood of choice from the mid-18th century onwards. It was imported from America, the West Indies, Cuba and Honduras. Satinwood was also employed for feather and cross-banding and decorative marquetry inlays. 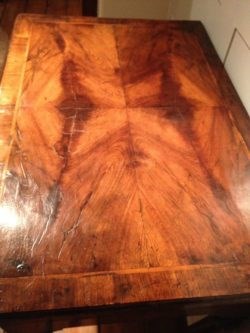 Detail of the figured walnut top with crossbanding on a George I period lowboy. Circa 1725. Raffety Ltd

Fashions too changed frequently in this period – you need only look through Chippendale’s famous pattern book, The Gentleman’s & Cabinetmaker’s Director, published in 1754, to see Chinoiserie, Rococo, Gothic & Neoclassical motifs aplenty. How people lived in their houses was also changing – the great hall as the centre of activity in the country house was gradually replaced by a host of different rooms for different activities : drawing rooms, dining rooms, libraries, etc. 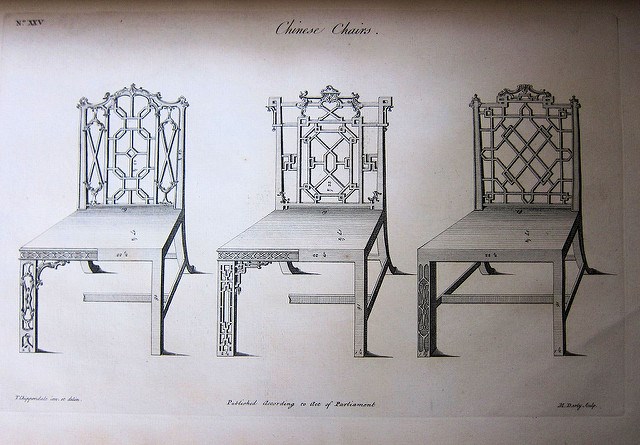 Designs for chairs in the Chinese taste by Thomas Chippendale. Circa 1754

However, not everyone lived in a big house, and it was also not uncommon for rooms to be used for a multiplicity of uses  – the drawing-room for example might function as a breakfast-room in the morning, a room for sewing, reading and letter writing in the afternoon, and for dancing & card-playing in the evening. So the furniture too had to be versatile for a range of functions and uses. So in a way it is not surprising that in this context of economic and cultural expansion, furniture design and manufacture reached a sort of zenith. 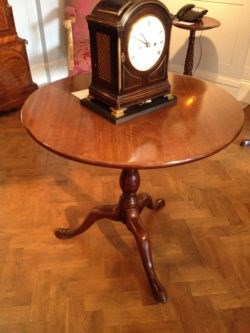 An ‘ocassional’ tripod table with padfeet, circa 1770. Raffety Ltd.

A good case in point is the occasional table with circular top. Raffety currently has one in the gallery in mellow mahogany with pad feet, dating to about 1770. These tables were made to be both elegantly simple in design, but also extremely useful. Indeed most affluent Georgian households would have had one or two, and they would have been in frequent use.  It’s size, usually about 76 cm in diameter, made it perfect for almost every occasion – whether reading, sewing, writing letters, or taking tea. The top was often on a pivot, so it could literally be folded up and set out of the way when not needed. Such tables appear frequently in paintings of the time, particularly in Conversation Pieces, a portrait type showing groups within an interior setting. 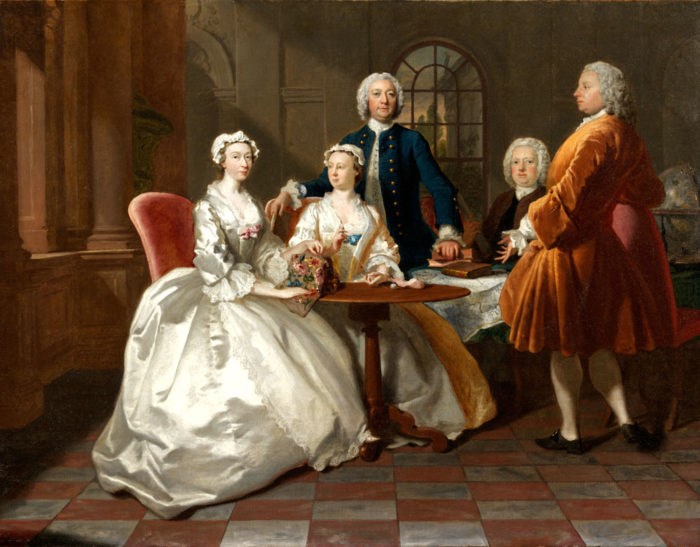 A Conversation Piece by Joseph Highmore. Typical of portraits of the period, the family is shown in an interior undertaking various pursuits. Two tripod tables (one covered with a table cloth) are being used for sewing and reading. Copyright Christie’s.

In Hogarth’s famous morality series  Marriage a la Mode (1745), we see the disorganised interior of the home of the Viscount and his new wife, after a night of drinking and gambling. A tripod table is used by the Viscountess for her morning tea or coffee, while a card table can be seen in the background, the cards littering the floor. Card or games tables were another favourite with Georgian high society. Cards and gambling were a popular pursuit among the upper echelons of Georgian society, and fortunes were won and lost at the gaming tables. 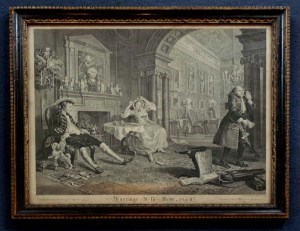 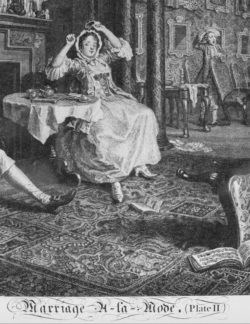 Detail of William Hogarth’s Marriage a la Mode, Plate 2, showing the occasional table and card table in the background. Circa 1745

Raffety’s mahogany games table dates to the reign of George II, around 1740. Being made of mahogany at this date shows this table to be the very height of fashion, as mahogany was then relatively new in use. The rounded, rectangular top opens to reveal a baize lined interior with ‘guinea’ wells and places for candlesticks, for those long nights of gambling into the wee hours. There is also the unusual feature of a drawer to the side, perfect for hiding away cards and game pieces.

Like the tripod table, the Georgian’s gave this table too more than one function. When closed and not in use for gaming it made a very fine side table, the perfect place for a clock or vase. However, it does have another surprise. It opens to a second tier with inlaid surface for backgammon or chess. 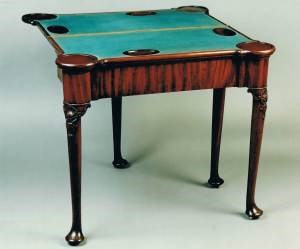 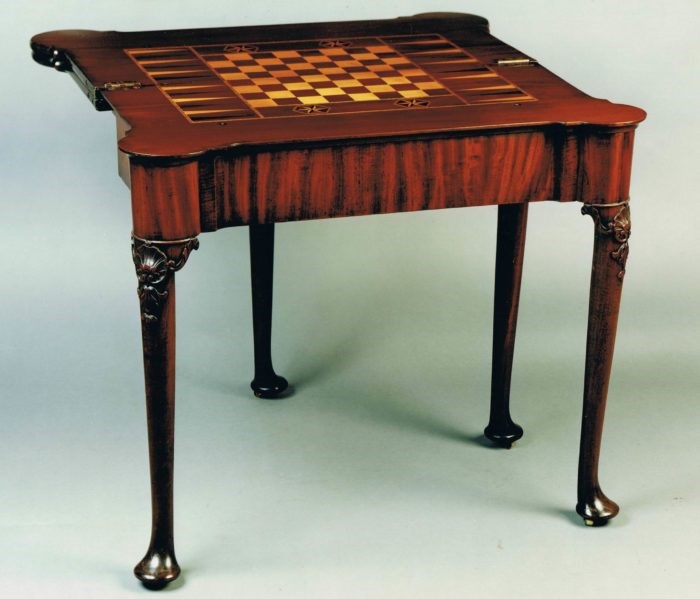 Detail showing the 2nd tier of the games table, chess and backgammon board in inlaid woods. Circa 1740. Raffety Ltd.

The fine design is finished off with a little Rococo flourish, with  finely carved foliage and shell panels at the top of each leg, which end in elegant pad feet. This games table is,  in many ways, the ultimate in elegant, fold-up furniture – it was made to function perfectly in a drawing-room or hallway until needed for an evening of distraction. 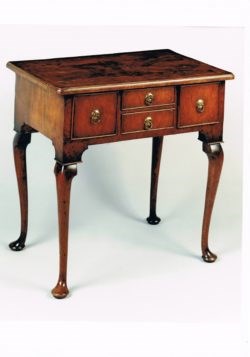 Not everything needed to fold away – in some cases they just improved on established designs, like the lowboy. These smaller tables with drawers had been around in earlier times, and again had multiple uses – a side table, an occasional writing desk, a dressing table, etc. The Georgian craftsmen gave them a makeover, using different types of wood and architectural proportions. Raffety’s lowboy, in walnut veneer, is a masterclass is Georgian elegance. It has a finely figured, rectangular top with rounded edges and cross-banding, and is finished off with cabriole legs and pad feet. It dates to the reign of George I, about 1725. Lowboys or these smaller side tables continued to prove an essential piece of furniture well into the 20 century.
While these three pieces of furniture are well over 250 years old, they do not seem to appear dated or unfashionable – indeed the opposite seems true. Their functionality, streamlined proportions and fine construction have stood the test of time. They work just as much today in a modern living/dining room or loft apartment as they did in Georgian drawing rooms. While they are the finest antiques, and certainly wonderful examples of 18th century English furniture design, their classic style and versatility gives them a unique freshness that fits perfectly with modern living.