Lantern Clocks: the First Clock for the Home

Lantern clocks hold a special place in the history of horology. Before Huygens innovation of the pendulum in 1656, lantern clocks were the first real technological innovation to enter the domestic realm in the early 17thcentury. These clocks were usually made of brass, and there is some tradition that the name lantern comes from the fact that brass alloys were sometimes known as ‘latten’. 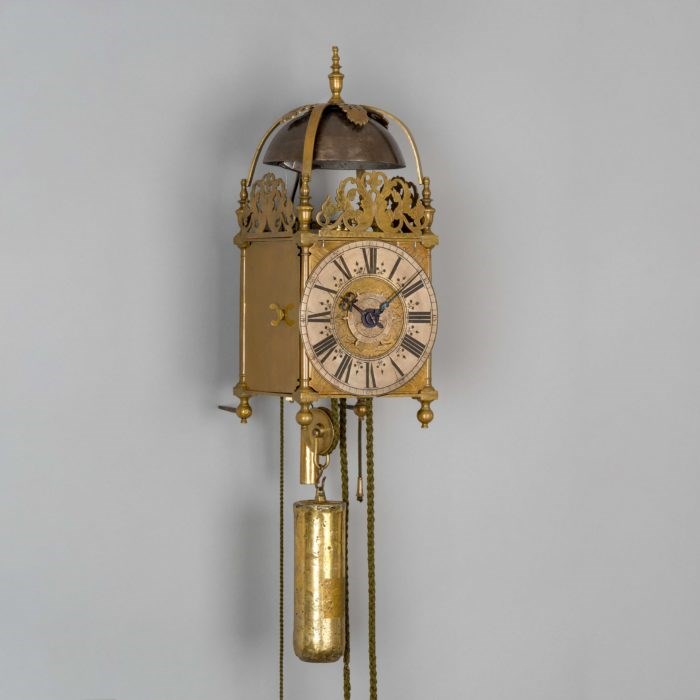 A lantern clock by Henry Jones of London, circa 1685. Raffety Ltd

These clocks were elegantly made, with four pillars enclosing the movement, which was weight driven, with generally two weights hung from ropes or chains at the bottom of the movement, gravity ensuring the working of the mechanism. Without a pendulum, their accuracy was not perfect, and there was no seconds hand. The weights needed to be pulled on a daily basis to keep the clock working. Later in their lives some lantern clocks had their escapements altered and pendulums added to provide greater accuracy. 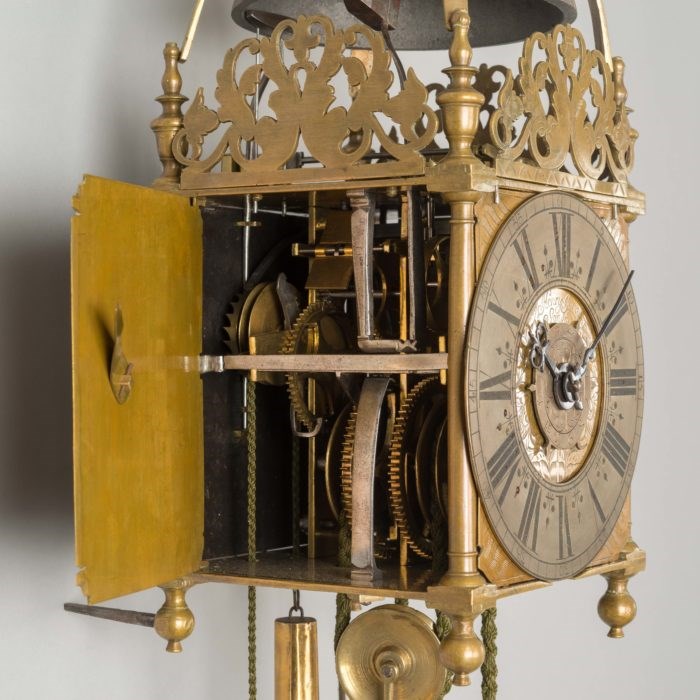 The elegantly decorated dials, often elaborately embellished with floral motifs and the signature of the maker in the centre, generally only showed the hours, with marks for the quarter and half hour. Most were fitted with a bell, striking on the hour, set into the top of the clock – it may be that this resulting domed shaped, with the large bell in the top, may also have led to the name ‘lantern’ since the design resembled domed lanterns. 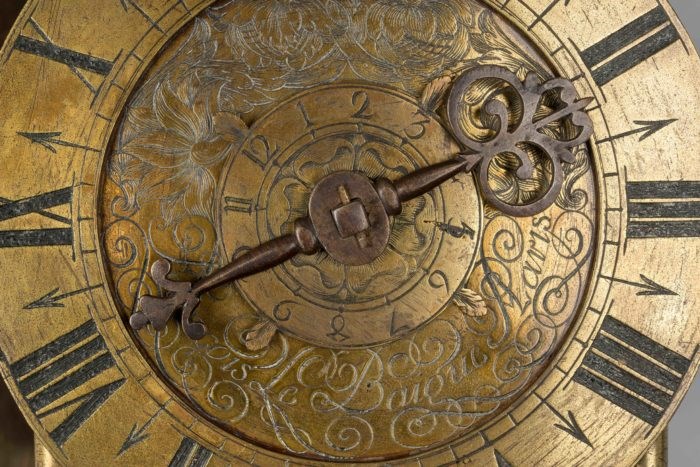 Detail of clock dial on lantern clock by Francois Le Baigue of Paris, circa 1700. Raffety Ltd

The lantern clock was the first clock that would have been common place in the finer homes of Britain from the early 17thcentury, and it was not until the 18thcentury, with its advances in technology and increased production of clocks, that their popularity began to wane in favour of the newer, more accurate table and bracket clocks. Today they are much loved by collectors and horological enthusiasts for their heritage, beauty and impressive sound when the clocks strike the hour. 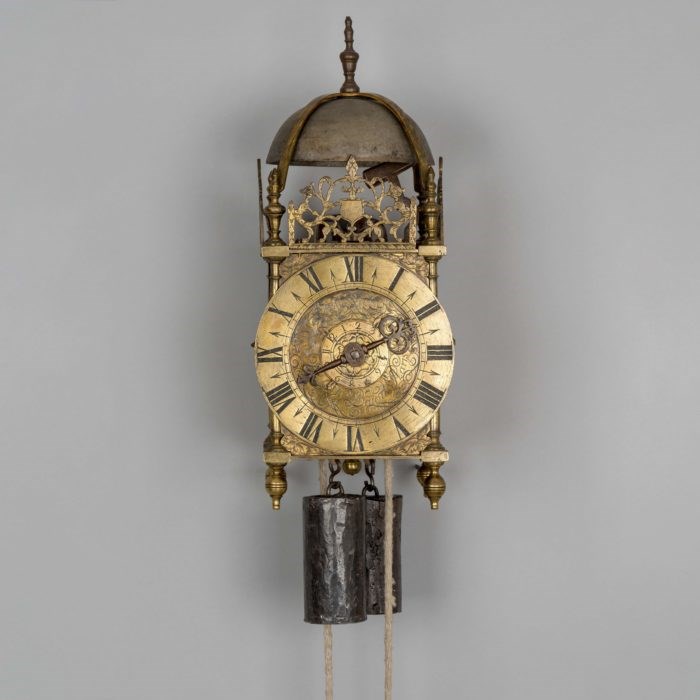 Raffety has two fine examples of lantern clocks currently available on our website – the first, by the London maker Henry Jones is dated to circa 1685 and is unusual in that has rack strike which enables an hour pull repeat at will by pulling the cord to the right side of the case as was more normal with table clocks of the period. 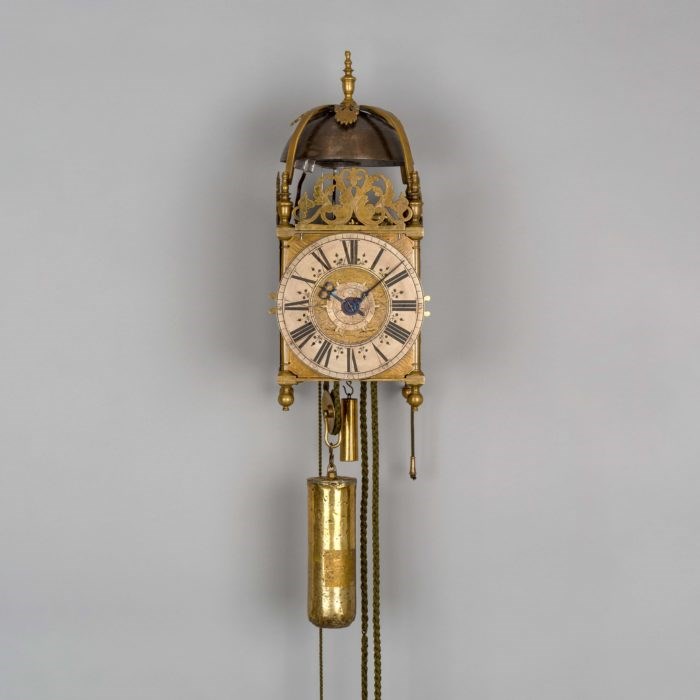 A further example is French in origin as dates to around 1700. By the well-known Parisian maker Francois Le Baigue – the clock has two trains with its original alarm disc and hour strike on a bell. 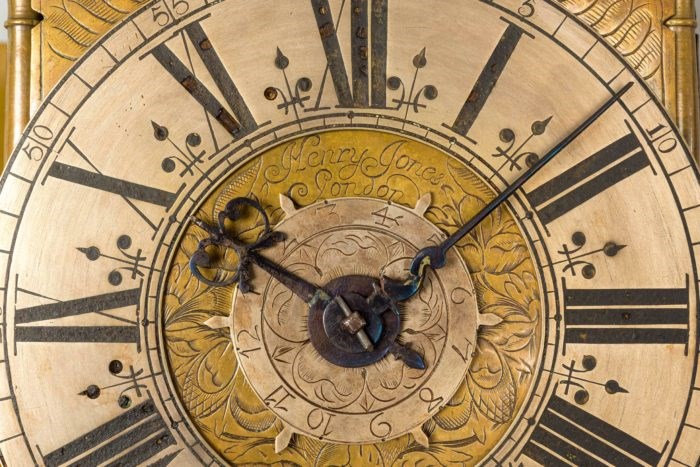 Detail of dial on lantern clock by Henry Jones of London. Raffety Ltd.

Both these clocks would add character and style to any hallway or drawing room. Their fine and elegant design and style is very appealing to those who are fascinated with both technology and horology, and if you are keen to start a collection of antique clocks, there is no better place to start than where Britain’s love affair with clocks and timekeeping really began over 300 years ago.

If you have any questions about lantern clocks, then Nigel Raffety is available to discuss your requirements. Both the clocks discussed above can be found on our website www.raffetyclocks.com and are available to purchase.