If you happen to follow Raffety Clocks on Instagram, Twitter or Facebook, you may have noticed that this October we have been showcasing wall clocks. There is a good reason for this. If you are new to clocks and collecting, then a wall clock makes an ideal first purchase – and it you are a true horology aficionado, then wall clocks are a necessity. 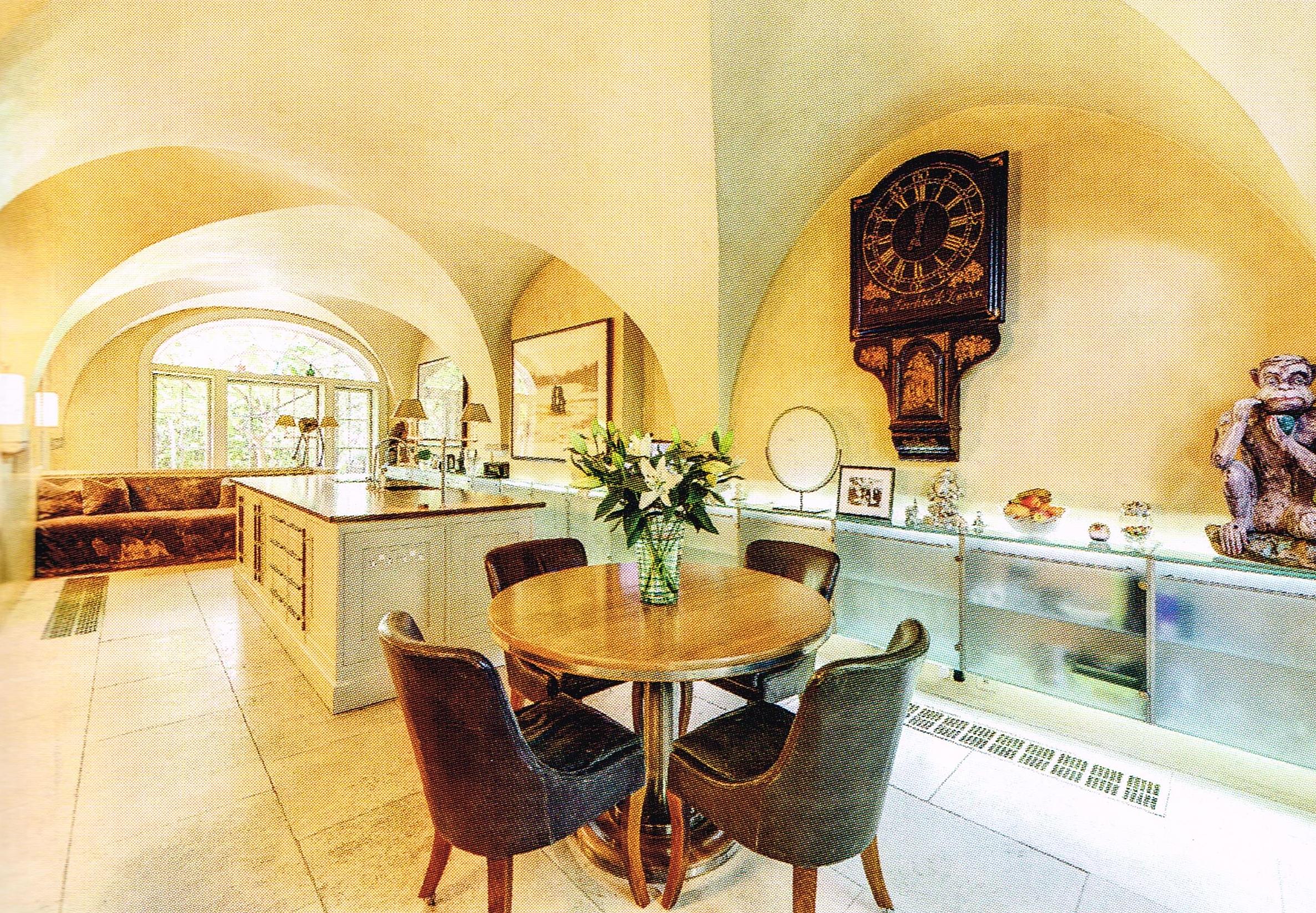 Modern kitchen interior with a prominent tavern clock on display.

The great thing about wall clocks is their variety – you can start at the very beginning of clocks for the domestic home with brass lantern clocks, which began to become prevalent in the early decades of the 17th century, or choose a bold 18th century tavern clock with lacquer decoration, or opt for the streamlined style of Viennese regulator, with their focus on glass and elegant brass weights. There is literally a wall clock to suit every taste, period and style. And above all a wall clock offers a bold & impressive statement in any interior – they enhance a room whether it is contemporary or period in style, and they compliment any decorative scheme. A historic wall clock will look great in a modern, high-tech kitchen or in a grand drawing-room juxtaposed with quirky antiques or bold contemporary pieces. 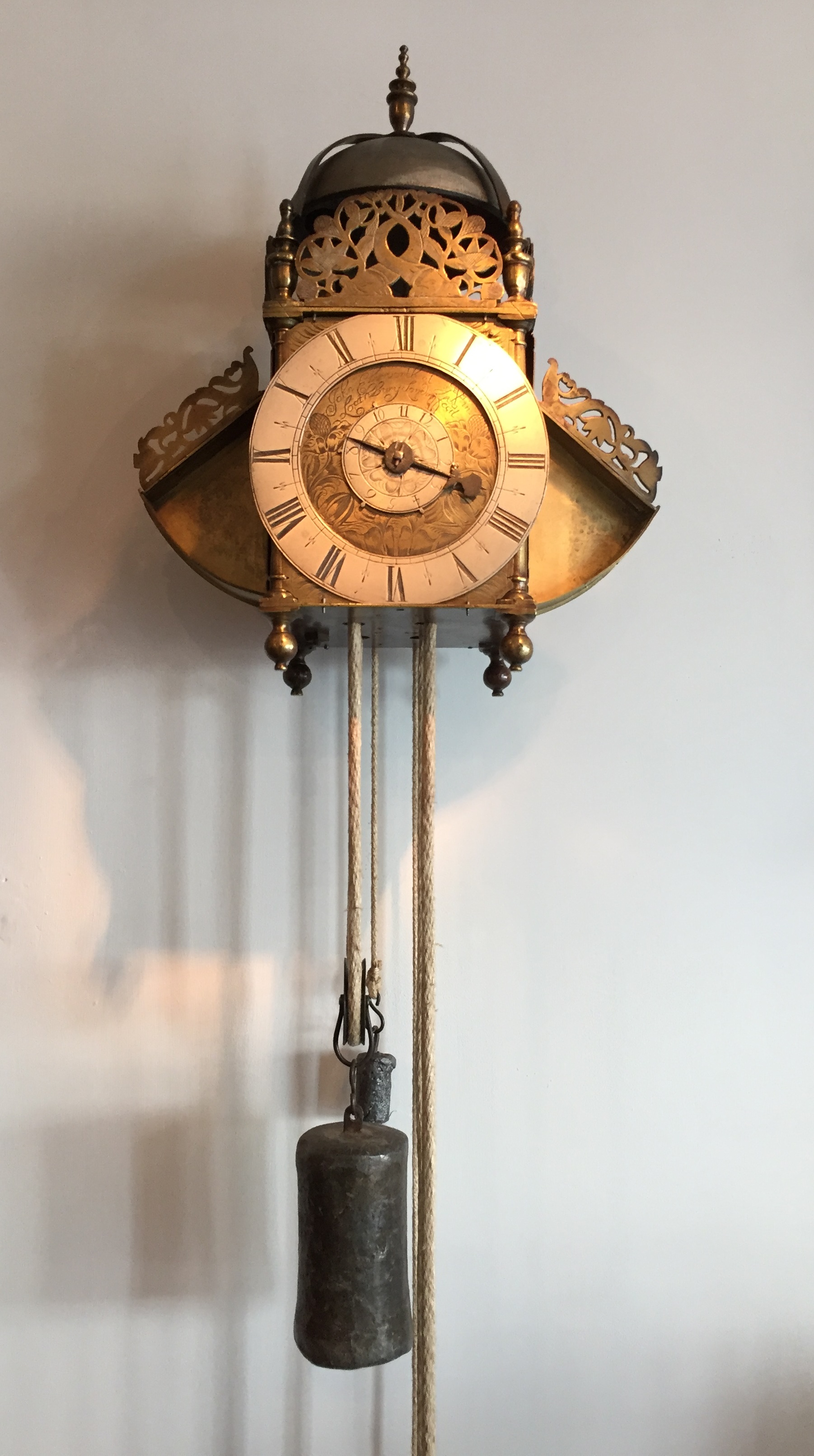 While they were never ideal timekeepers, usually lacking a minute hand, lantern clocks were the first clock to become common in the domestic sphere. You will sometimes see them depicted in 17th and 18th century paintings of domestic interiors, attached to a wall. 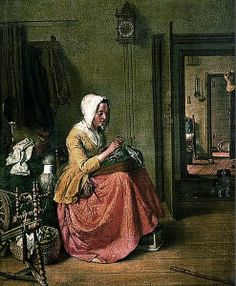 Painting of a house interior with wall clock. Artist unknown.

Their heavy weights and tactile elements – requiring you to pull the weight cable every day – make them still very popular and fun too. Some, like this example by John Ebsworth of Lothbury, London, had “winged” side doors to show off the centrally swinging pendulum. This example dates from about 1685 and strikes the hours on a large single bell which surmounts the engraved brass case that encloses the verge movement. Lantern clocks stayed popular throughout the 18th century, and sometimes had the additional of a minute hand. 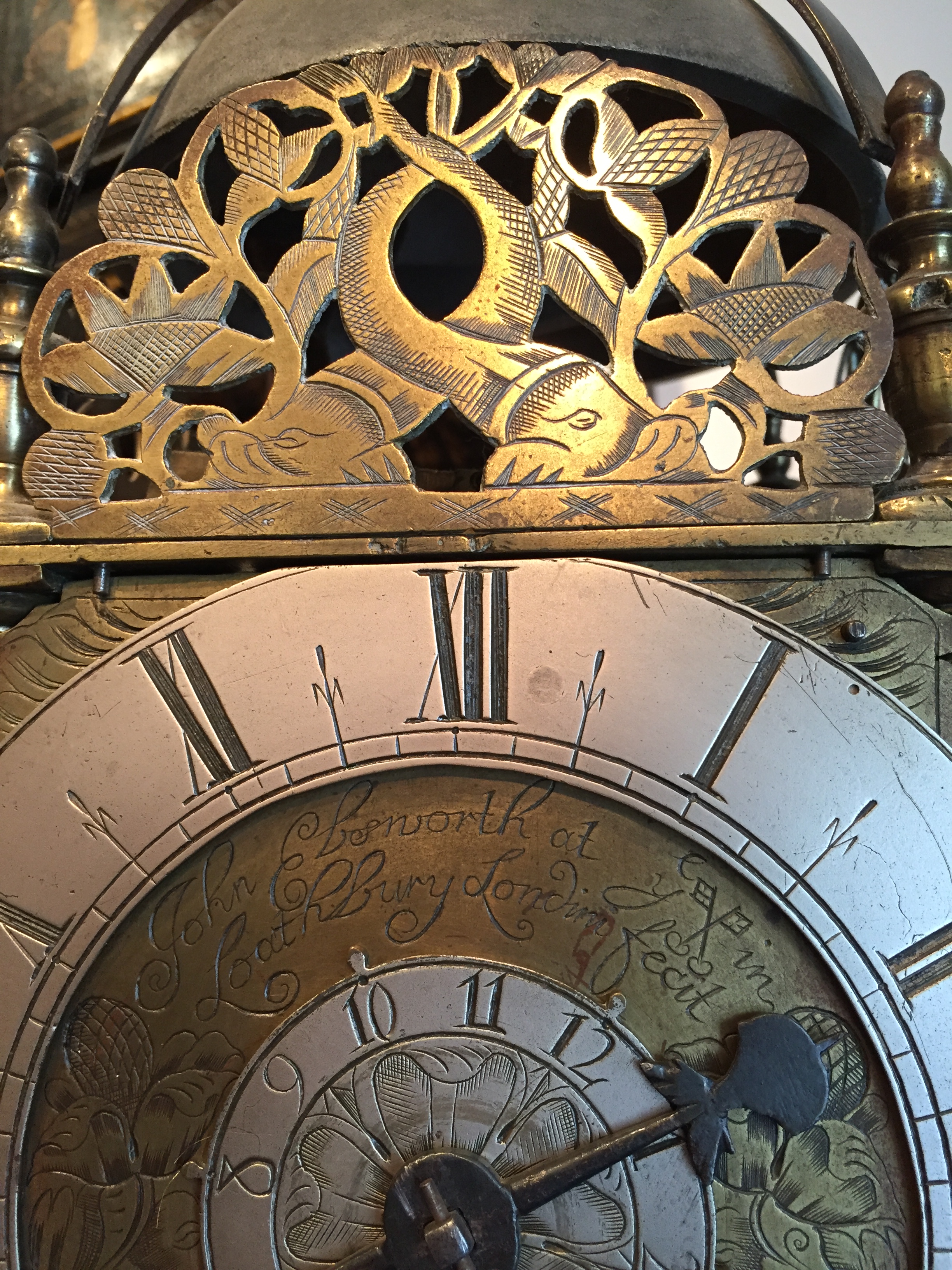 Detail of the Ebsworth lantern clock with engraved dolphin decoration above the signed dial. Raffety Ltd.

Jump forward into the 18th century and you find the impressively large and decorative tavern clocks, sometimes called Act of Parliament clocks. These wall clocks, made of lacquered oak and consisting of large painted dials, with the pendulum encased within the rectangular trunk door, appear from the 1720s onwards. Their popularity seems to correspond to the expansion of coaching routes and postal services – as specific times of arrival and departure of coaches became more prevalent, there was a need for easily readable clocks in taverns and coaching inns. 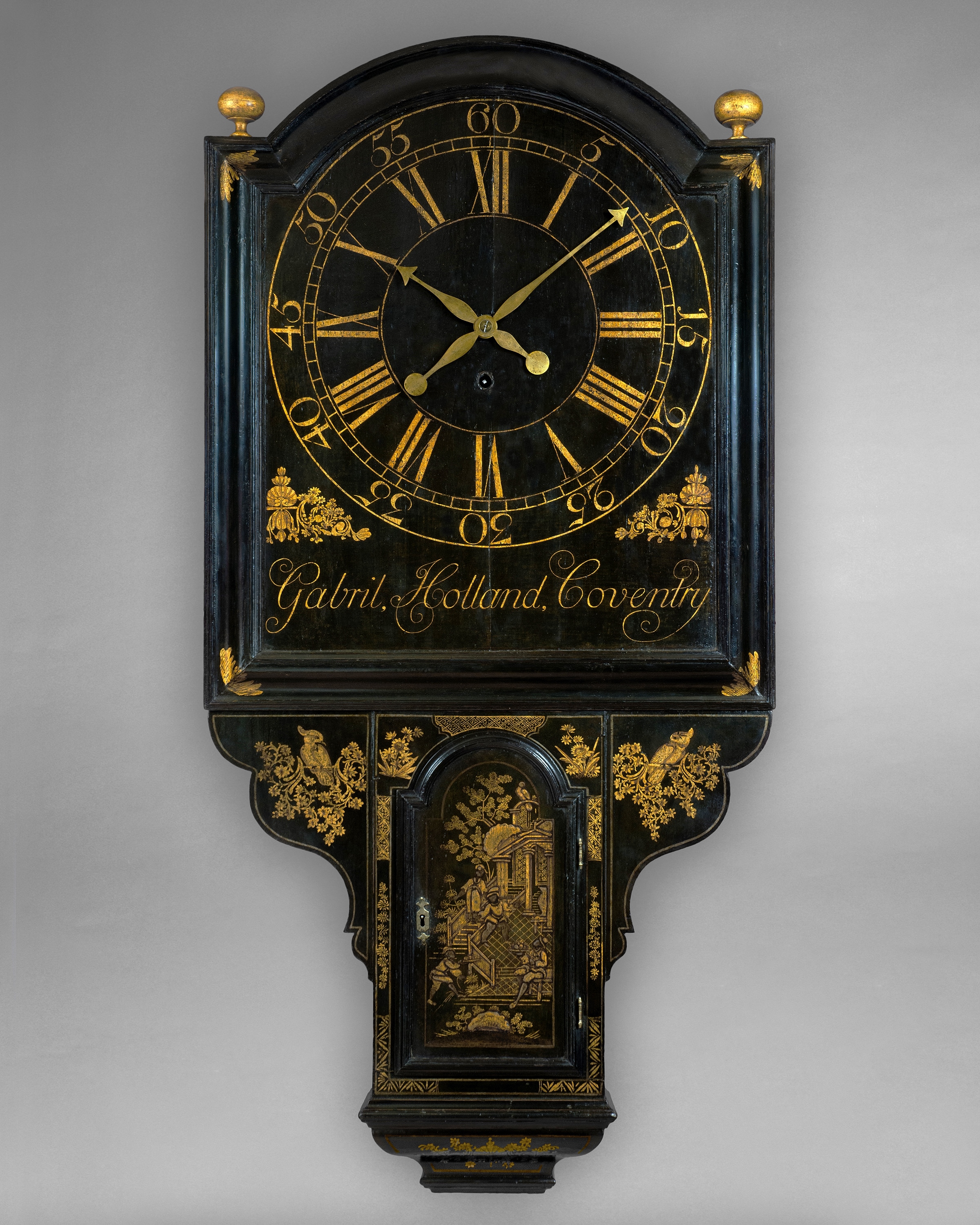 The choice of chinoiserie lacquerwork seems to have been down to contemporary fashion, and made these big clocks more decorative and noticeable. Black is the most common colour, but there are also examples is red, green and blue lacquer. Today their large painted dials and chinoiserie scenes make them the perfect choice for a double height room or loft space where they make a signature statement. 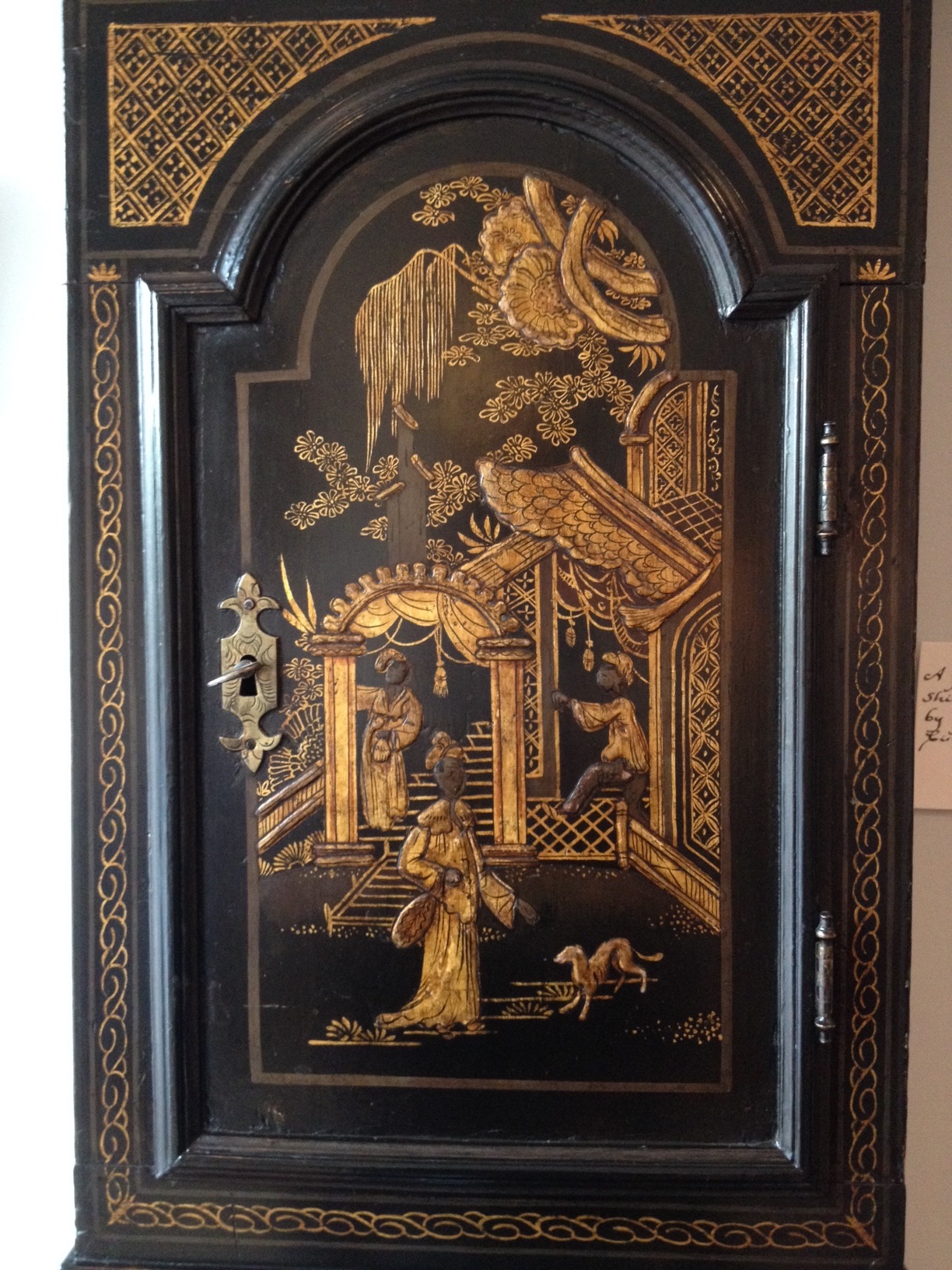 Detail of chinoiserie decoration with pavilion and landscape, on a tavern clock by John Johnson, London. Circa 1760. Raffety Ltd.

Over the long reign of George III there are even more wall clock choices. Just as coach and postal services may have influenced the rise of tavern clocks, so too the growth of commerce and even the popularity of cookery books seems to have influenced wall clocks. Banks and offices, along with servants halls and kitchens in stately homes found a need for a wall clock to keep track of business times, cooking durations, and the daily round of events and activities. These tended to consist of a large silvered, painted or enamelled round dial with the movement and pendulum encased within a round wood case. 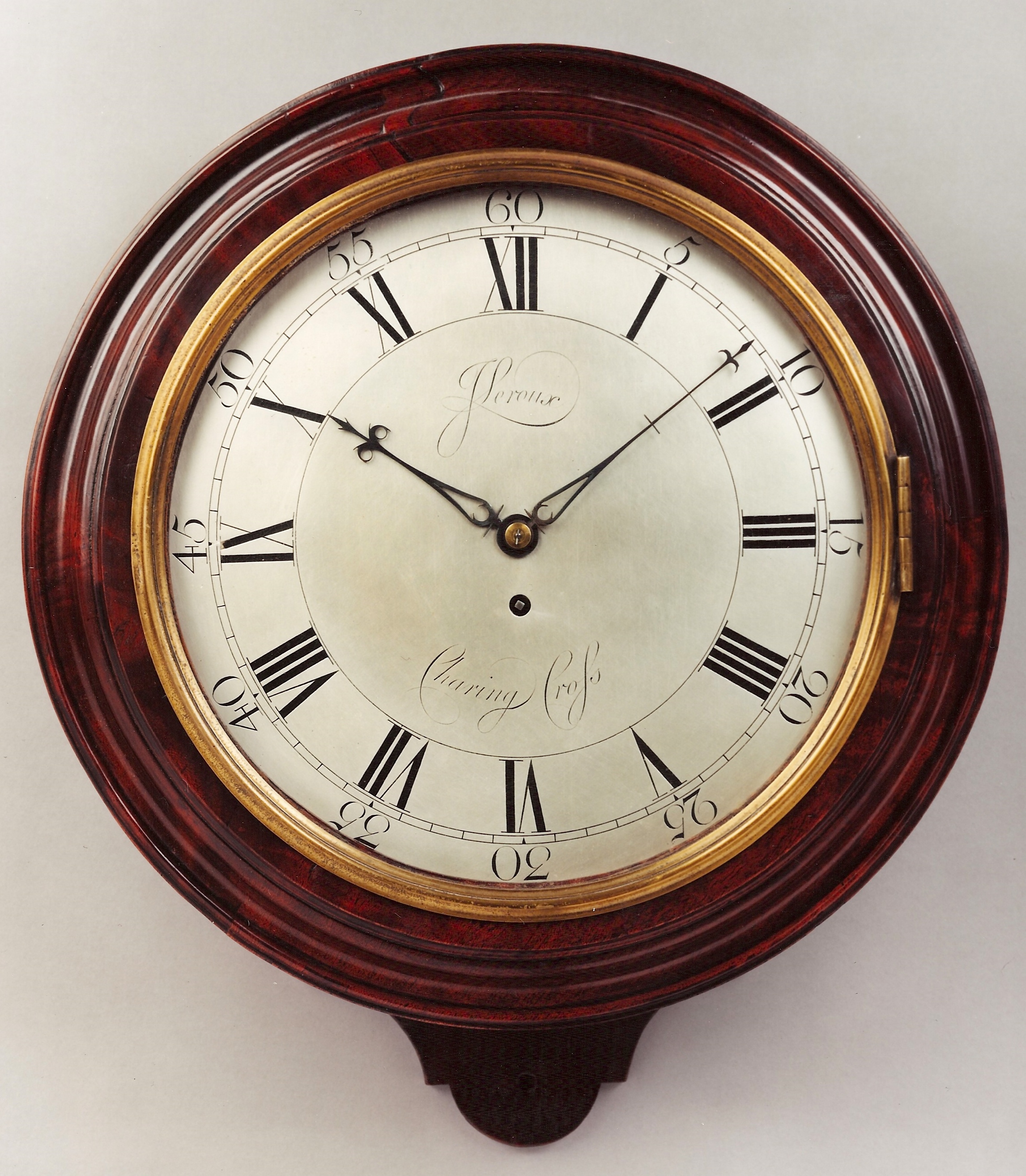 A particularly nice example is this one by J Leroux of Charing Cross, London, dating to the late 18th century. It has an 8-day movement with tapered plates and anchor escapement.  The elegant round, 12 inch silvered dial has blued steel hands and is surrounded by a moulded mahogany case. Even today its simple but elegant style seems contemporary. This is a clock that will never look out-of-place or dated. A larger example, by John Skinner of Exeter, with 21 inch dial, and dating to the Regency period is illustrated below.

Large wall timepiece by John Skinner of Exeter. Circa 1811. As in the Leroux emphasis is on the dial and hands.  Raffety Ltd

The Victorians loved wall clocks, and they continued to have both domestic and industrial uses. The new railways and industrialisation meant wall clocks turned up everywhere, from railway stations to factories. While stylistic fashions could be extremely diverse, the general focus continued to be on large dials that were easy to read. 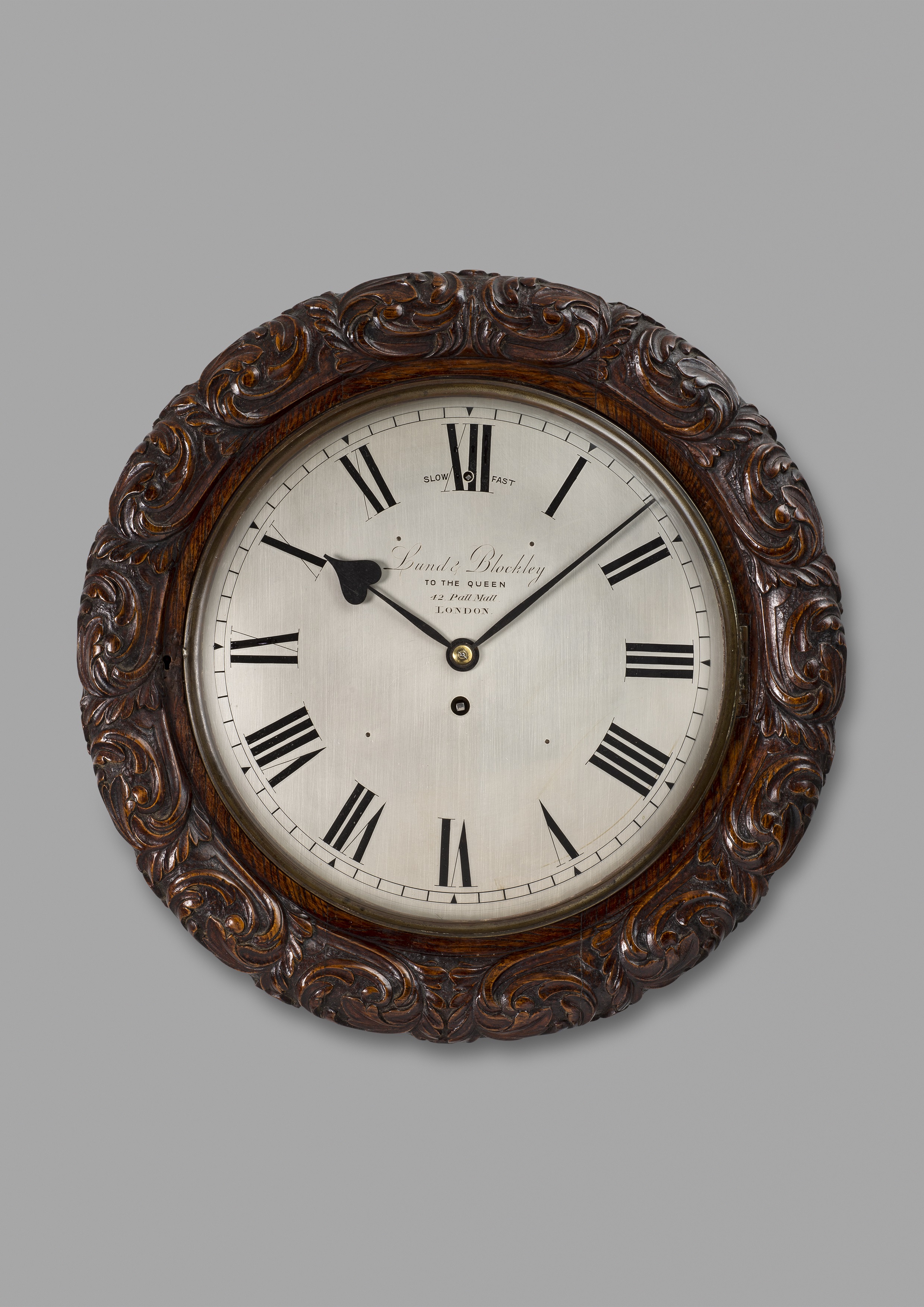 This Victorian example, dating to 1875, is by Lund and Blockley of London. The 17 inch silvered dial is surrounded by an elaborately carved oak case with foliate motifs. The makers supplied clocks to Queen Victoria and therefore signed the dial with both their name and address (42 Pall Mall) and the added flourish ‘To the Queen’. In all cases these wall clocks, even when for utilitarian use, had fine quality, accurate movements.

An Austrian regulator timepiece with mahogany case by Brutmann in Wien. Circa 1850. Raffety Ltd

Leaving Britain briefly, one final example of a wall clock to be found in the Raffety gallery are Austrian regulators. These also date to the 19th century and were intended to show off the fine quality, accurate movements. Thus, everything about the design is focused on displaying the construction of the clock. This example, signed ‘Brutmann in Wien’ has a mahogany case designed with large glass panels to show off the large steel flat rod pendulum and weight, with decorative flourishes limited to the pie crust pediment and carved finials to top and bottom. Glass panels to the sides of the dial offer a view of the movement. Although this was made around 1850, its crisp design give it a very contemporary look.

Detail of glass panel on side of Brutmann clock, offering a view of the movement. Raffety Ltd

So, whether you choose a 17th century wall clock, or one from the mid-19th century, each will make a bold impression wherever you place them, either on their own or juxtaposed with other paintings or objects. Their history will add interest to any room. But above all these are working clocks, and they will give you the time, and much enjoyment, for as long as you wind them regularly.